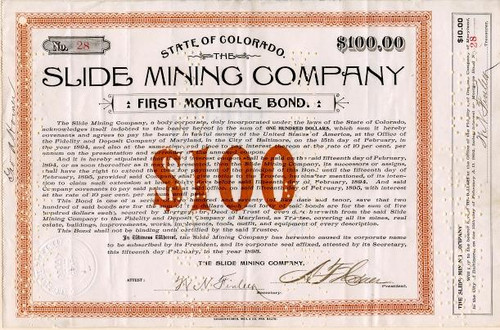 Beautifully engraved Certificate from the Slide Mining Company issued in 1893. This historic document was printed by the American Banknote Company and has an ornate border around it with the company's name on top. This item is hand signed by by the company's president, A. F. Horner and is over 123 years old. The certificate was also signed on the verso by Edwin A. Warfield as President of Fidelity and Deposit Company of Maryland. 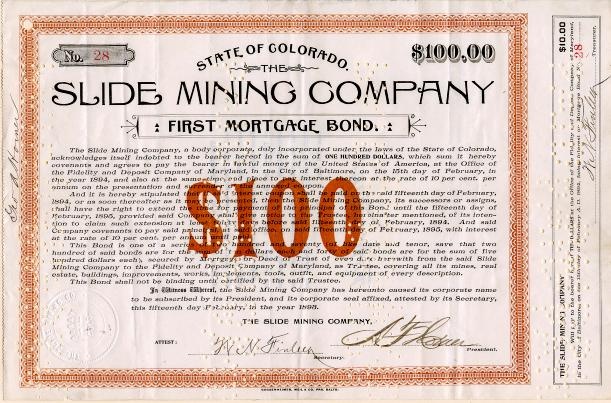 The Slide mine was located north of Dexter Creek, about a half mile from Lake Lenore. The Slide mine was worked by Frank Butterfield in 1890- a profitable operation (Frank Rice, The Mines of Ouray County). The slump in the silver price in 1893 caused a shutdown. The mine later reopened under the new name of Newsboy, but lack of milling facilities made profits small. Edwin A. Warfield (1848-1928) Warfield was a member of the Maryland Senate from 1882-86 and its president in 1886. He was governor of Maryland from 1904-08. He was President of the Fidelity and Deposit Company prior to becoming Maryland's Governor. Since 1890, The Fidelity and Deposit Company served as the premier bonding company in the nation, as well as a leader in the protection of financial institutions with property and casualty insurance. It now goes by the name F&D.

Edwin A. Warfield's signature on verso
Ouray was founded in 1876. The first non-Indians in the valley were looking for gold and silver. Ouray is nestled in the San Juan Mountains, the "Shining Mountains" of the Ute Indians--their sacred hunting grounds. The San Juans are the youngest and most rugged mountains in the Rockies. Ouray is known as the "Switzerland of America". The 1890 Silver Purchase Act was passed by the U.S. Congress to supplant the BLAND-ALLISON ACT OF 1878. It required the U.S. government to double its purchase of silver and to increase money in circulation. The Sherman Silver Purchase Act (supported by John Sherman only as a compromise with the advocates of free silver) threatened, when put into operation, to undermine the U.S. Treasury's gold reserves. After the panic of 1893 broke, President Cleveland called a special session of Congress and secured (1893) the repeal of the act.