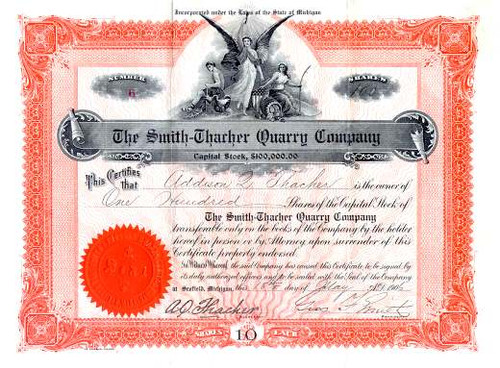 Beautifully engraved certificate from the Smith-Thacher Quarry Company issued in 1906. This historic document has an ornate border around it with a vignette of three allegorical women, one of which is holding up a torch. This item is hand signed by the company's president (Gus F. Smith) and secretary (Addison Q. Thacher) and is over 94 years old. Gus F. Smith was a 1st Lieutenant in the 111th OVI during the Civil War. He wrote a paper about the Battle of Franklin. The small town of Franklin, Tennessee had been a Federal (Union) military post since the fall of Nashville in early 1862. Late in the summer of 1864, Confederate President Jefferson Davis replaced commander Joseph E. Johnston with John Bell Hood. General Hood, a graduate of the U.S. Military Academy and known for his superb record with his "Texas Brigade," suffered from a withered arm and amputated leg. A firm believer in frontal assaults, Hood begins to formulate his "Tennessee Campaign of 1864" with the main objective to drive Sherman away from Atlanta and Robert E. Lee's forces. The Secretary of the company was Addison Q. Thacher. The certificates were also made out to Addison Thacher and signed by him on the verso. In 1932-1933 Addison Q. Thacher was the Republican mayor of Toledo Ohio in the midst of the Depression. Toledoans blamed the city's mayors for much of the difficulty with relief during the first years of the Depression. Voters had rejected four versions of city manager government in 1928 and 1931, but in 1931 they also rejected the incumbent mayor, William T. Jackson, in favor of Addison Q. Thacher. Both men were Republicans, but neither obeyed the dictates of the party organization. During Thacher's two years in office the banks failed, unemployment soared, and the city bankrupted itself trying to feed the hungry. Citizens blamed corruption in the city government for the inadequacy of relief for the unemployed. As the crisis deepened, poor relief became the major task of city officials. But with 30,000 people on the rolls, Toledo was nearly bankrupt by 1933. Addison Q. Thacher, a Republican mayor from 1931 to 1933, won attention for an imaginative program of distributing free food collected from unsold perishables of grocers and restaurants. But with the necessity to supply food for 50,000 to 60,000 people by the spring of 1932, the task for a city government was overwhelming. After the inauguration of Franklin D. Roosevelt in March, 1933, as president, the new Federal Emergency Relief Agency began direct federal assistance. It reported in 1933 that Toledo was hit harder than any city in the state with a rate of relief need nearly double that of the state as a whole. In 1933 Socialist Solon T. Klotz challenged Thacher for the office of mayor, and won by fewer than three thousand votes. The city soon complained that Klotz was not capable of leadership. The conflict within the city government, the worsening financial crisis, and the continuing maneuvering of the Republican party "machine" convinced some of the former Independents that the City Charter should be changed to ensure nonpartisan government. Prior to becoming a Toledo's mayor, Addison Q. Thacher was fight promoter. He set up the event know as The Fight: Jess Willard vs. Jack Dempsey on July 4, 1919, for the heavyweight boxing championship of the world. In 95-degree weather, the two squared off at Bay View Park, off Summit Street in North Toledo. Never before - and never since - had Toledo been host for an athletic event of this magnitude. More than 200 reporters turned up, and the city's dateline appeared in newspapers around the globe. For one day, Toledo was the epicenter of the sporting world. Though the fight was considered the most important heavyweight match ever at the time, many others have equaled or surpassed it. Still, Dempsey-Willard holds a special, revered place in boxing lore, mostly related to the rise of Mr. Dempsey. "It had tremendous significance," says Al Bernstein, ESPN's boxing analyst and host of the Big Fights Boxing Hour. Mr. Dempsey held the title for more than seven years before losing it to Gene Tunney in September, 1926. Only Joe Louis had a longer, uninterrupted reign as heavyweight champion this century than the one Mr. Dempsey started in Toledo.