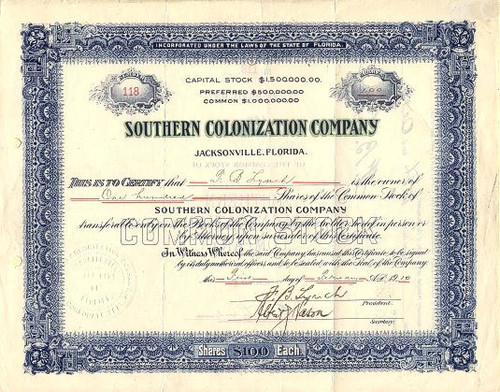 Beautiful certificate from the Southern Colonization Company issued in 1910. This historic document has an ornate border around it. This item has the signatures of the Company's President, Frederick B. Lynch and Secretary, Albert J. Wilson and is over 99 years old. 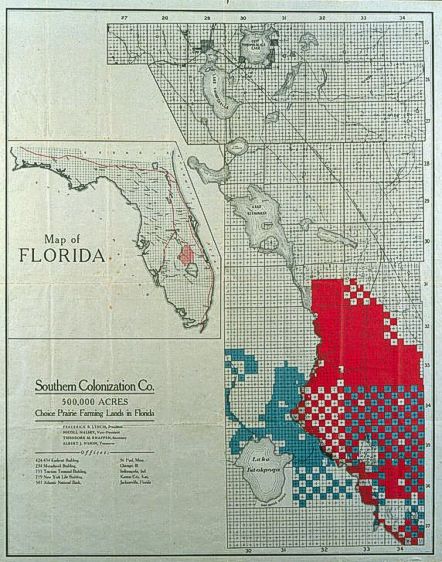 Old Company Map shown for illustrative purposes
Southern Colonization Company indicates 500,000 acres choice prairie farming lands in Florida. The Southern Colonization Company purchased a 36 square mile tract of land in the lower Kissimmee River valley. It was believed that the prairie lands would be perfect for farming. The land was platted, and a development team set up a hotel and demonstration farm. Prospective buyers came down the Kissimmee River, were picked up in wagons, and taken around to look over the land. The standard tract sold was ten acres, as the project was planned for small farmers. The buyers were promised that a railroad would soon be built into the area. The Southern Colonization Company entered into a contract to build a railroad from Kenansville to a point called Prairie Ridge, about 12 miles north of Basinger, by the end of June, 1916. Original plans called for the South Florida and Gulf Railroad to extend to Basinger, and possibly Okeechobee, but it never got any farther than Prairie Ridge. For a short period, the train arrived at Prairie Ridge every Saturday and Basinger residents drove wagon teams to the depot to pick up supplies. It soon became apparent to the Prairie Ridge area settlers that the wire grass, palmettos, ponds and swamps were better suited for cattle than for farms, reducing the need for a railroad. Train service was discontinued and the rails were sold at a financial loss. The railroad bed became a sand road and is today known as the Peavine Trail. History from ghosttowns.com