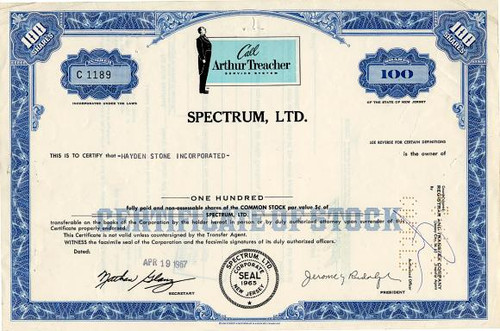 Beautiful certificate from the Spectrum, Ltd issued in 1967. This historic document was printed by Security-Columbian Banknote Company and has an ornate border around it with a vignette of the company's logo with the words words "Call Arthur Treacher Service System". This item has the signatures of the Company's President and Secretary and is over 40 years old. 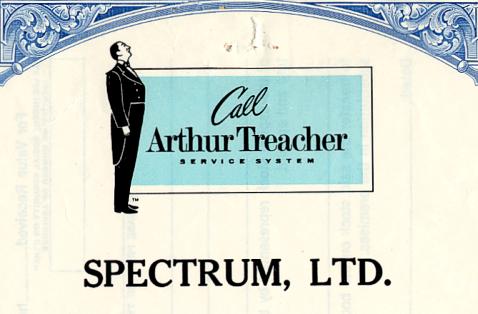 Certificate Vignette
Spectrum, Ltd. was a household help agency. Arthur Treacher Born: Jul 23, 1894 in Brighton, England, UK Died: Dec 14, 1975 in Manhasset, Long Island, New York Occupation: Actor Active: '30s-'40s Major Genres: Comedy, Romance Career Highlights: Step Lively, Jeeves!, Thank You, Jeeves, Thin Ice First Major Screen Credit: The Battle of Paris (1929) Of the many candidates for the throne of "Hollywood's favorite butler," Brighton-born Arthur Treacher was the undisputed victor. The son of a British lawyer, the tall, hook-nosed Treacher did not settle upon an acting career until he was 25, after serving in WWI. Starting out as a chorus "boy," Treacher rose to popularity as a musical comedy performer. He came to America in 1928 while he was appearing in a revue titled Great Temptations. Entering films in 1933, Treacher quickly established himself in butler or servant roles, notably in several Shirley Temple films. He was awarded top-billing in Thank You, Jeeves (1936) and Step Lively, Jeeves (1937), both based on the gentleman's-gentleman character created by P.G. Wodehouse. Remaining active on Broadway, Treacher was prominently billed in such stage productions as Cole Porter's Panama Hattie and the 1944 revival of The Ziegfeld Follies. After several years away from Hollywood, Treacher returned in 1964 to portray a constable in Disney's Mary Poppins, which turned out to be his final film. Arthur Treacher enjoyed a latter-day popularity in the 1960s as the acerbic sidekick of TV talk show host Merv Griffin, and through the franchising of his name and image for such business concerns as Arthur Treacher's Fish and Chips and the Call Arthur Treacher Service System (a household help agency). Arthur Treacher's Fish and Chips is a fast food seafood restaurant chain with, as of 2003, 177 stores which serve fish and chips. Like its main competitor Long John Silver's, Arthur Treacher's faced bankruptcy, and the brand has been acquired by TruFoods Systems, Inc. Nathan's Famous bought the exclusive rights to market the Arthur Treacher's trademark and sell their products co-branded with Nathan's own concepts Kenny Rogers Roasters and Miami Subs. Arthur Treacher's Fish and Chips once had over 950 locations throughout the United States. The company was bought out by Orange Co. in the 1970s and later sold to Mrs. Paul's Seafood. The company was then bought by a group of investors and the corporate offices were relocated to Youngstown, Ohio. During the years of high growth customers would line up for hours to eat in the 27-50 seat restaurants with about 50% of the business as take out. The chain started in 1969 with Long John Silver's; Captain D's, Skipper's and H. Salt Esquire all started about the same time. They introduced British fish and chips to America. Arthur Treacher's and Long John Silver's probably became the most prolific companies in the expansion of fish and chips in the late 1970s. By 1979, Arthur Treacher's had about 800 stores. In 1981, Britain and Iceland almost got into a war over fishing rights, and when they implemented the 200-mile (370 km) fishing limit it was called the 'cod wars.' Cod prices went from the low $2 range to the mid-$3 range, and it sent the industry into a death spiral, and all the companies retrenched. Treacher's was henceforth sold to Mrs. Paul's from Orange Co., a public company that was primarily in the orange futures trading business. They immediately replaced the Icelandic codfish with pollack, which was cheaper and inferior in quality. The company then went into bankruptcy in 1983, and emerged again in 1985. It was merged into a shell by Jim Catalan. From 1985 to 1993, Catalan started to grow the company again, albeit very slowly, followed in 1993 by an investment in the company by a group of investors. The investment was going to be used to bring out a new, more modern, and updated seafood concept. The money was used to buy a large number of stores and move the company from its base operations in Youngstown, Ohio to Jacksonville, Florida. The chain is named for Arthur Treacher (1894 - 1975), an English character actor who was known as "the perfect butler" for his performances as Jeeves and as a butler in several Shirley Temple films. He served as a spokesman for the restaurant chain in its early years, underscoring the British character of its food. In America, Arthur Treacher is also remembered as the sidekick and announcer of The Merv Griffin Show in the late 1960s and early 1970s. Arthur Treacher was also the policeman who returned the Banks children home in the motion picture Mary Poppins. History from Wikipedia and OldCompanyResearch.com.