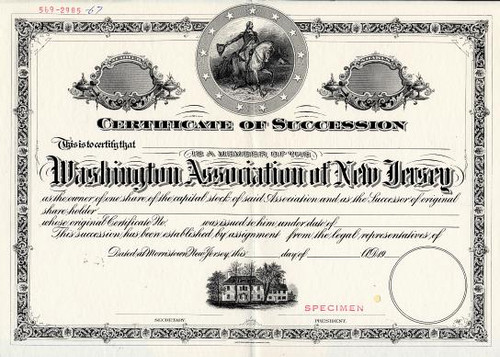 Beautifully engraved specimen membership certificate from Washington Association of New Jersey printed in 1967. This historic document was printed by the American Banknote Company and has an ornate border around it with a vignette of a George Washington on horseback.

Certificate Vignette
About the Washington Association of New Jersey The Washington Association of New Jersey (WANJ) was founded to acquire and preserve Washington's Headquarters at the Jacob Ford Mansion. It was chartered by the New Jersey legislature in 1874 and is the not-for-profit advisory and fundraising body for the Morristown National Historical Park (MNHP). The main structure in the park is the Jacob Ford Mansion, where Washington headquartered in the winter of 1779-1780. In 1933, the WANJ conveyed the headquarters, Jockey Hollow and Fort Nonsense to the federal government, and Congress established the MNHP as the country's first national historical park. John Russell Pope (architect of the National Gallery of Art and the Jefferson Memorial) was commissioned to design a museum building, which was erected in 1935. The Washington Association of New Jersey (WANJ) is one of the oldest historic preservation organizations in the nation. The objects of this Association are: (1) To act with the National Park Service in the preservation of the property known as Washington's Headquarters, in Morristown, as a memorial to George Washington, and commemorative of his associate officers, and the heroism and fortitude with which the Continental Troops withstood the severe hardships and suffering of the winters of 1777 and 1779-1780 while encamped in and about Morristown. (2) To engage and assist in the collection and preservation of papers, documents, paintings, relics, books and objects of interest connected with the Revolutionary War. (3) To engage in such other activities as may be deemed desirable and proper for the purpose of perpetuating the memory of George Washington and those who were associated with him in the Revolution and the founding of the Republic. (4) To raise funds sufficient to carry out the above purposes. Preserving Washington's "Revolutionary" Legacy The Washington Association of New Jersey is the not-for-profit and Congressionally legislated advisory body for Morristown National Historical Park. The Park's primary historic site is the Jacob Ford, Jr. mansion, which served as George Washington's military headquarters during the Continental Army's 1779-80 encampment in Morristown. The contribution of Washington's Morristown Headquarters to the success of the American Revolution was underscored by a group of prominent men, "the founding four", who purchased the mansion from Ford's descendants at an auction in 1873. On March 20, 1874, to oversee the preservation and maintenance of the site, the Washington Association of New Jersey was incorporated. The following July, the Association's newly created charter and By-laws established that the house be open to the public. In the following 29 years, the Washington Association amassed a vast collection of paintings, historical prints, maps, books, documents, manuscripts, furniture, costumes, and other artifacts. Now numbering in the hundreds of thousands, barely 1% have ever been seen by the public. The First National Historical Park In early 1933, the Trustees of the Washington Association decided to convey the Headquarters, the Jockey Hollow Encampment, Fort Nonsense, and its numerous collections to the federal government. On March 3,1933, President Hoover signed legislation to establish the Morristown National Historical Park, the first national historical park in the nation. America's most famous museum architect of the period, John Russell Pope, (whose projects include the National Gallery of Art, the National Archives, and the Jefferson Memorial), was chosen to design a new museum building. However, Pope's 1935 concept was not fully realized due to financial constraints caused by the Great Depression. 3/2/32 President Hoover established the Morristown National Historical Park as the first National Historical Park. History from Wikipedia, Encyberpedia and OldCompany.com (old stock certificate research service) About Specimens Specimen Certificates are actual certificates that have never been issued. They were usually kept by the printers in their permanent archives as their only example of a particular certificate. Sometimes you will see a hand stamp on the certificate that says "Do not remove from file". Specimens were also used to show prospective clients different types of certificate designs that were available. Specimen certificates are usually much scarcer than issued certificates. In fact, many times they are the only way to get a certificate for a particular company because the issued certificates were redeemed and destroyed. In a few instances, Specimen certificates we made for a company but were never used because a different design was chosen by the company. These certificates are normally stamped "Specimen" or they have small holes spelling the word specimen. Most of the time they don't have a serial number, or they have a serial number of 00000. This is an exciting sector of the hobby that grown in popularity over the past several years.