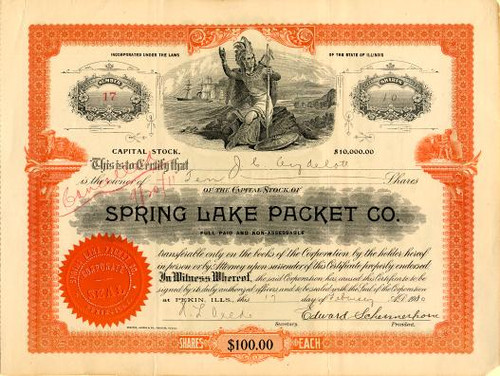 Beautifully engraved certificate from the Spring Lake Packet Co. issued in 1900. This historic document has an ornate border around it with a vignette of an indian chief. This item is hand signed by the Company's President (Edward Schemmerhorn) and Secretary and is over 105 years old. 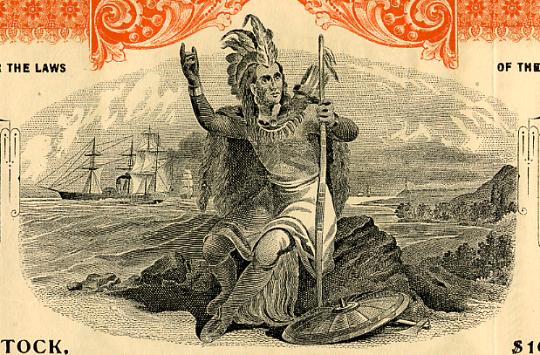 Certificate Vignette
Early residents of the Spring Lake area were mound building Native Americans. The most noted tribes throughout the river valley at the time the French arrived included the Peoria, Kaskaskia, Cahokia, Tamaroa and Michigamie. Most of the Native American people were driven out of the valley by around 1770, and tribal remnants ceded last claims to the area in 1833. White settlement of the Spring Lake valley began around 1830. Steamboats penetrated up the Illinois River to Peoria in 1829 and by the mid-1800s a significant commerce developed along the river in commodities such as grain and meat. Spring Lake at that time became a feeder-type waterway joined to the river by a backwater slough. Establishment of the Spring Lake Drainage and Levee District in 1903 resulted in construction of a large dike around the bottoms containing Spring Lake, and boat access to the river was no longer possible. Therefore, the Drainage District was required to construct a marine railway over the dike to accommodate water traffic. Legend has it the railway was used only once, eventually fell into disrepair and was abandoned. Spring Lake also was used by shallow draft vessels for navigational purposes until about 1915.