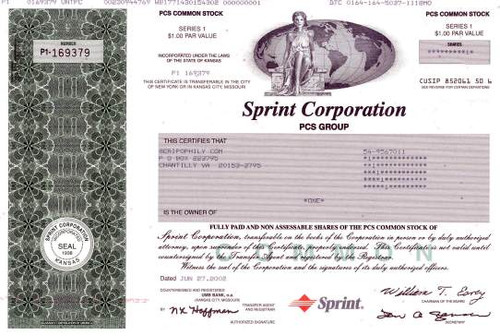 Beautifully engraved certificate from the Sprint Corporation PCS Group. This historic document was printed by the Banknote Corporation of America and has an ornate border around it with a vignette of the compnay logo and an allegorical woman sitting infront of a globe. This item has the printed signatures of the Company's Chairman of the Board ( William T. Esrey ) and Secretary. 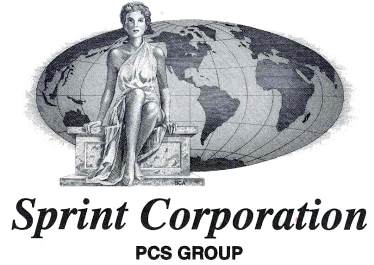 Certificate Vignette
Sprint PCS Group (a Sprint Corporation unit with its own tracking stock) runs an all-digital wireless network that serves about 14.5 million subscribers. The company has PCS licenses covering some 360 metro areas throughout the US. Its network uses code division multiple access (CDMA) technology. The group provides wholesale PCS services to independent regional affiliates such as AirGate PCS and Alamosa Holdings, extending the reach of the Sprint PCS brand and adding 2 million customers to the group's subscriber count. Sprint Corporation is a global communications company serving more than 26 million business and residential customers in over 70 countries. With approximately 80,000 employees worldwide and more than $26 billion in annual revenues, Sprint is widely recognized for developing, engineering and deploying state of the art network technologies, including the United States' first nationwide all-digital, fiber-optic network. Sprint's award-winning Tier 1 Internet backbone is being extended to key global markets to provide customers with a broad portfolio of scalable IP products. Sprint's high-capacity, high-speed network gives customers fast, dependable, nonstop access to the vast majority of the world's Internet content. Sprint also operates the largest 100-percent digital, nationwide PCS wireless network in the United States, already serving the majority of the nation's metropolitan areas, including more than 4,000 cities and communities. PCS shares were converted into Sprint shares on April 23, 2004. In September 1996, Sprint announced an alliance with RadioShack, and in 1997 Sprint Stores opened at RadioShack to offer their portfolio of communications services and products through RadioShack Stores across the United States. Since then, over 20 million Sprint cell phones have been sold via the RadioShack outlets. RadioShack was one of the first retailers to offer Sprint services and PCS cellular and an all-digital nationwide network for its customers. On October 5, 1999, Sprint and MCI WorldCom announced a $129 billion merger agreement between the two companies. The deal would have been the largest corporate merger in history at the time. However, the deal did not go through because of pressure from the United States Department of Justice and the European Union on concerns of it creating a monopoly. In 2003, Sprint began recombining their local telecom, long distance, wireline, and wireless business units into a new company, marketing the combined company as "One Sprint." In April 2004, the separately traded wireless tracking stock, "PCS," was absorbed into the New York Stock Exchange (NYSE) "FON" ticker symbol, Sprint's former ticker symbol. (FON stood for "Fiber Optic Network," which was Sprint's bragging right, but was also a homophone of the word "phone"). This was challenged in many lawsuits by Sprint PCS shareholders who felt robbed because their stock was devalued through the ratio of 1 share of PCS stock for 1/2 share of FON stock. The PCS shareholders claimed a loss of 1.3 billion to 3.4 billion dollars. Sprint recently agreed to settle with the shareholders for only 57.5 million dollars. This is Sprints third class action settlement reached in recent weeks as of September 25, 2007. Sprint settled an age discrimination lawsuit for 57 million dollars with former employees earlier in September of 2007 History from Wikipedia and OldCompanyResearch.com (old stock certificate research service).