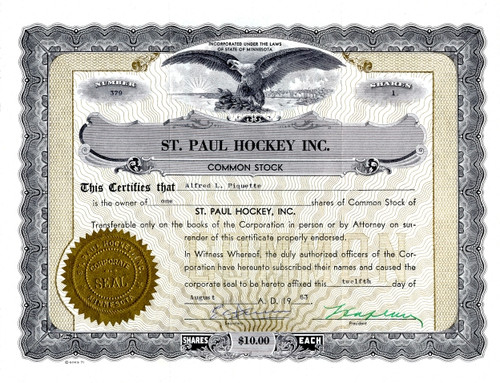 Beautiful certificate from the St. Paul Hockey Inc. issued in 1960. This historic document was printed by Goes and has an ornate border around it with a vignette of an eagle. This item has the signatures of the Company's President and Secretary and is over 46 years old.

Certificate Vignette
The St. Paul Rangers were a minor professional ice hockey team based in Saint Paul, Minnesota. They were one of the original five teams of the Central Professional Hockey League. They were an affiliate of the NHL's New York Rangers. Their name was changed to the Minnesota Rangers in 1965 after the neighbouring city of Minneapolis lost its Central League team. The Rangers, though, continued to play in St. Paul. In 1966 the Rangers moved their farm team to Omaha, Nebraska in anticipation of the start of the NHL's Minnesota North Stars in 1967. The Rangers won the Adams Cup in 1964-65. Stock research by OldCompany.com (old stock certificate research service).