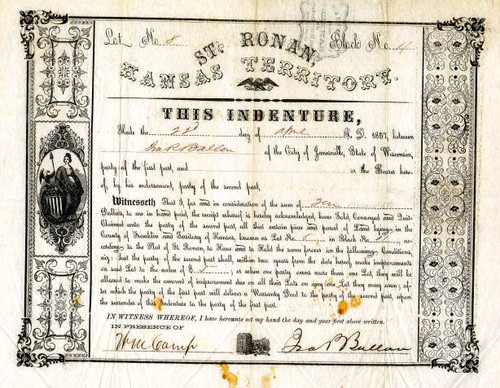 St. Ronan, Kansas Territorial Land Deed, April 22, 1857. Issued at Janesville, Wisconsin by a land company for a $10 lot in Franklin County, the owner was required to make an additional improvement to the lot to the value of $5. The town never incorporated. This historic document has an ornate border around it with a vignette ofLady Liberty with an American flag and an eagle. This item has been hand signed by two witnesses, Ira P. Ballou and Wm Camp and is over 154 years old. Stamped on back "Ira P. Ballou - Private Bankers and Real Estate Brokers -Janesville, Wisconsin"

Certificate Vignette
Ira P. Ballou ,b. in Bristol, N. H., Sept. 8, 1823; m. Chicago, Ill. Settled at Beaver Dam, Wis. He was a talented, enterprising and executive man. He practiced law at one time, and then went into land speculation to some extent, but later turned his attention to large contracts for the construction of city water works and railroad building. He went to the Island of Cuba on the last mentioned business, contracted to build 100 miles of railroad, set 200 men at work, was attacked by yellow fever, and died in four days, Sept. 5, 1870. The Territory of Kansas was an organized incorporated territory of the United States that existed from May 30, 1854, until January 29, 1861, when the eastern portion of the territory was admitted to the Union as the State of Kansas. The territory extended from the Missouri border west to the summit of the Rocky Mountains and from the 37th parallel north north to the 40th parallel north. Much of the eastern region of what is now the State of Colorado was part of Kansas Territory. The Territory of Colorado was created to govern this western region of the former Kansas Territory on February 28, 1861. Research by OldCompany.com (old stock certificate research service).