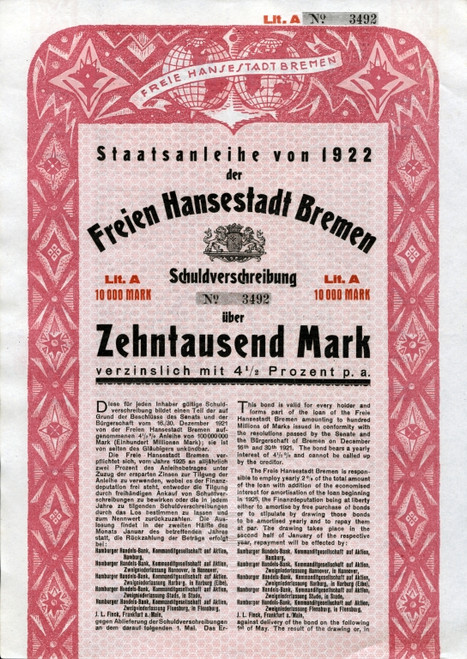 Beautiful uncancelled certificate from the Freie Hansestadt Bremen issued in 1922. This historic document has an ornate border around it with a vignette of two world globes. This item has the printed signatures of the government officials. 4,5 % Schuldverschreibung 10.000 Mark 1.11.1922. 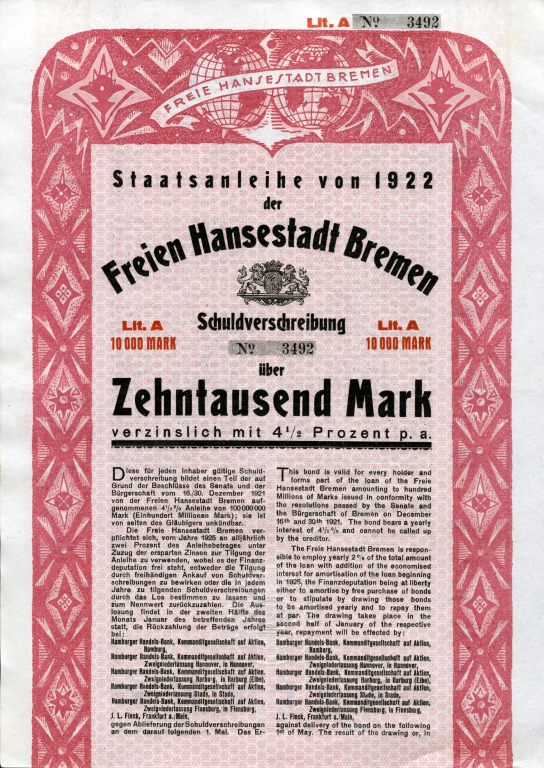 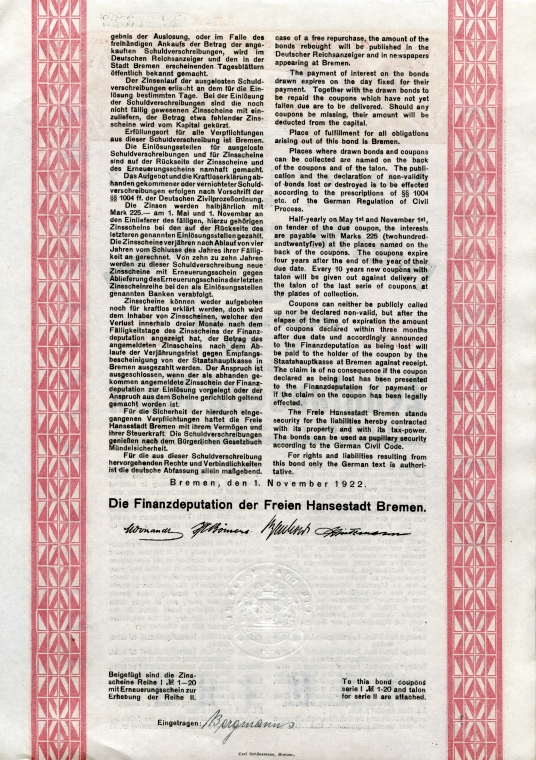 Certificate Back
Bremen, 782 first called, was charged 787 under Charlemagne by Bishop Willehad to the diocese. The destruction of the Archdiocese of Hamburg was founded in 831 by the Normans 845 gave the occasion, 847 to relocate the archbishopric from there to Bremen and unite both dioceses. This took over the task of Bremen missionary of the Scandinavian North, especially the archbishops Ansgar, Rimbert, Unni and Unwan devoted themselves with success. The most brilliant appearance in the series of Archbishops was Adalbert (1043-1072), who extended the Church's sphere of influence Bremen to Iceland, Greenland and Finland, without the planned Patriarchate of the North to reach. 965 Bremen was awarded market rights. The Nordic SufraganbistÃ¼mer lost Bremen, which was founded in 1104 Archdiocese of Lund. The secular territory of the archbishops was limited to the area between the Weser and Elbe estuary (county Stade). Against the opposition of the last two Catholic archbishops Christoph and Georg von Braunschweig, the Reformation prevailed. 1186 Bremen was recognized as an independent municipality of Emperor Frederick I and fought under the first-mentioned Council 1225 independence from the archbishop's city Lord. The 1646 Empire-won freedom could be won again only at great sacrifice against Sweden and later defended against Hannover and only in 1741 after the archbishopric of Bremen was awarded the Peace of Westphalia in 1648 as secular duchy to Sweden and 1712 went to Denmark and in 1720 in Hanover. Since 1806 is Free Hanseatic City of Bremen. Special features: Bilingual German / English. No folds.