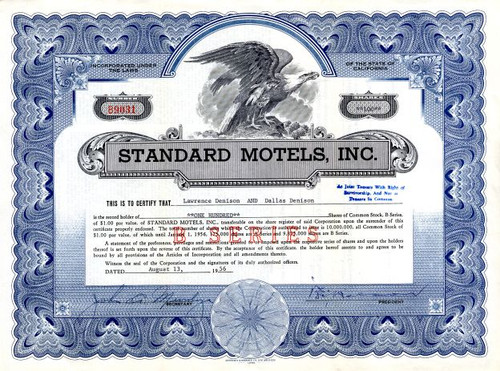 Beautiful stock certificate from Standard Motels, Inc. issued in 1956. This historic document was printed by the Jeffries Banknote Company and has an ornate border around it with a vignette of an eagle. This item has been hand signed by the Company's President, and Secretary, and is over 55 years old. 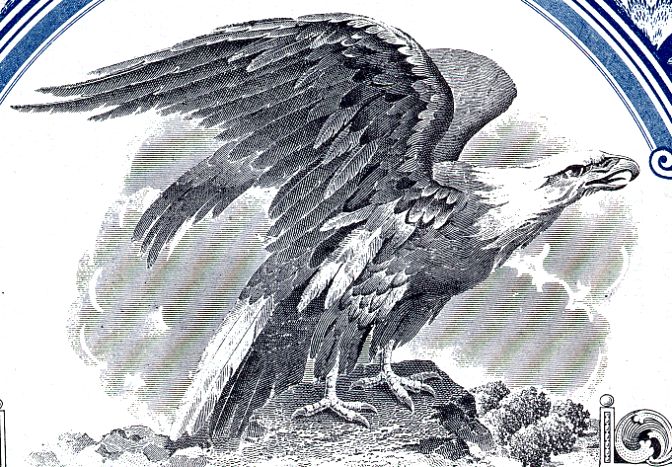 Certificate Vignette
The Hacienda was a Paradise, Nevada hotel/casino that operated on the Las Vegas Strip from 1956 to 1996. It was one of four Hacienda properties owned by Standard Motels, Inc., with the other three being located in Fresno, Bakersfield, and Indio, California. The other Haciendas also featured the distinctive Horse and Rider sign. (The Las Vegas sign is now prominently displayed at the entrance to the Neon Museum. The fate of the other signs is unknown.) Located by itself on the far south end of the Las Vegas Strip, it was the first resort seen by tourists driving up from California. Since it was so far from the other resorts at the time, many people who stayed at the Hacienda would not go elsewhere. The Hacienda was also located close to McCarran International Airport, and at one point they had their own airline, Hacienda Airlines, so they could fly in gamblers from all over the world. The Hacienda was known for their inexpensive, all-inclusive junkets marketed to American Midwestern retirees. Hacienda owner "Doc" Bayley formed Hacienda Airlines in 1957. Offering packages that included transportation from Los Angeles to the Hacienda as well as a room and some casino chips. The airline included DC-3s, DC-4s and Lockheed Constellations numbering as many as 30 aircraft. In the 1970s, the casino was owned by Argent Corporation. In 1995, the Hacienda was purchased by Circus Circus Enterprises from Archon Corporation. By this time, it was dwarfed by the many new megaresorts that were being built, in particular the Luxor which had just been recently completed. On December 1, 1996, the Hacienda was closed to the public, and imploded later that month. This implosion was broadcast on the Fox Network as a part of their New Year's Eve 1996 telecast. Despite the implosion, parts of the old resort still stood, due to the building not falling into its footprint, but toppling into its parking lot. The next day a wrecking crew was brought in to bring down the remaining parts. Lance Burton, magician, produced, directed and wrote his own show at the Hacienda beginning in 1991. The show ran for five years before Lance moved to the Monte Carlo Resort and Casino. In March 1999, it was replaced by the Mandalay Bay Resort and Casino. The Hacienda name lives on in the Boulder City casino property, which is unaffiliated. Warren "Doc" Bayley was chairman of the board of Standard Motels, Inc. which owned Hacienda Hotels in Bakersfield, Fresno, and Indio, California. Bayley and his wife, Judy, opened the Hacienda Hotel at 3950 Las Vegas Boulevard South (almost two miles south of the other strip casinos) with 265 rooms in June of 1956. The casino didn't open until early 1957 because of problems with the Gaming Control Board. The Hacienda catered to the family market with several pools and a go-cart track for the kids. This out-by-its-self location created problems at first, so by the early 1960s Bayley, who was a pilot, maintained a fleet of thirty airplanes to bring customers in from California. The Argent Corporation owned the Hacienda from 1972 until 1977. Then Paul Lowden, who had purchased the Sahara from Del Webb, took control. - Imploded 12/31/96 and replaced by Mandalay Bay Hacienda, 3950 Las Vegas Boulevard South In 1956, the Hacienda Casino/Hotel opened for business under the ownership of Warren "Doc" Bailey and Judy Bailey. The casino cost the Baileys $6 million and it consisted of 266 rooms. In 1975 it was remodeled and then sold to Circus Circus Entertainment and then to the Mandalay Resort Group for $80 million in 1995. In 1996 it was imploded to make way for Mandalay Bay. Stock research by OldCompany.com (old stock certificate research service).