Beautiful certificate #225 from the Standard Oil Trust issued in 1882 for 500 shares. This historic document was printed by Franklin Banknote Company and has an ornate border around it with a vignette of the Capitol with horse driven carriages in front. This item is hand signed by John. D. Rockefeller, Henry M. Flagler, and Jabez Abel Bostwick. This certificate was issued to W.C. Andrews for 500 Shares and is signed by him on the verso. This item is over 139 years old. The signatures on this certificate are nice and bold. Pen and press cancelled. Signed twice by W. C. Andrews, once on the side and once on the back. 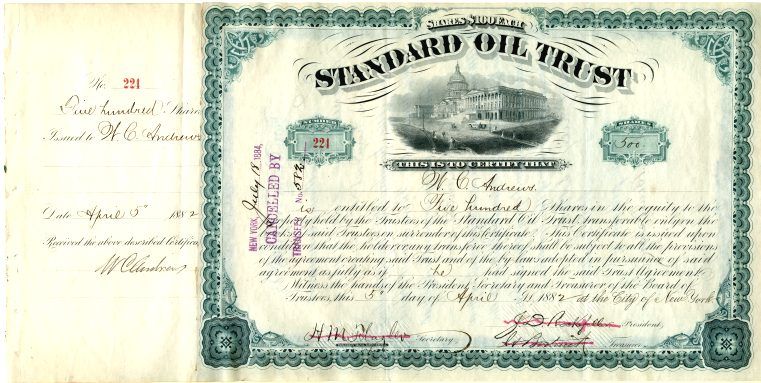 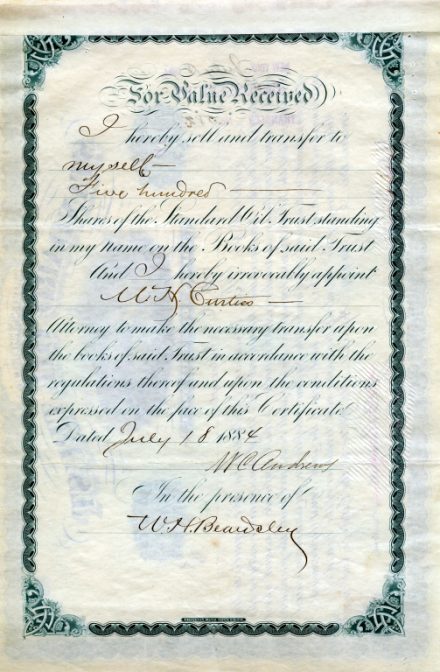 W. C. Andrews Wallace Corydon Andrews was born in Vienna, Ohio 17 June 1833. He was one of the original directors of the Standard Oil Company, and in 1879 became President of the New York Steam Company. The steam heating industry was still in its infancy, and the challenges of introducing the system to a city as large as New York seemed almost insurmountable. Yet Wallace C. Andrews decided to take on that challenge. He acquired franchise and license rights to deploy the Holly system, and incorporated the Steam Heating and Power Company of New York in 1879. Andrews acquired a competing firm that was formed in 1880, the New York Steam Company, and the two companies consolidated in 1881 under the latter name. The company built by Wallace Andrews was to go on to even greater success during the 20th century, but he was not to see it. During the night of April 7, 1899, Andrews and much of his family perished in a house fire. His brother-in-law, G.C. St. John, who was out of town when the tragic fire occurred, was made president of the company and guided it for more than a decade during a prolonged legal battle over Andrews' will. THE STANDARD OIL COMPANY Rockefeller's stake in the oil industry increased as the industry itself expanded, spurred by the rapidly spreading use of kerosene for lighting. In 1870 he organized The Standard Oil Company along with his brother William, Andrews, Henry M. Flagler, S.V. Harkness, and others. It had a capital of $1 million. By 1872 Standard Oil had purchased and thus controlled nearly all the refining firms in Cleveland, plus two refineries in the New York City area. Before long the company was refining 29,000 barrels of crude oil a day and had its own cooper shop manufacturing wooden barrels. The company also had storage tanks with a capacity of several hundred thousand barrels of oil, warehouses for refined oil, and plants for the manufacture of paints and glue. Standard prospered and, in 1882, all its properties were merged in the Standard Oil Trust, which was in effect one great company. It had an initial capital of $70 million. There were originally forty-two certificate holders, or owners, in the trust. After ten years the trust was dissolved by a court decision in Ohio. The companies that had made up the trust later joined in the formation of the Standard Oil Company (New Jersey), since New Jersey had adopted a law that permitted a parent company to own the stock of other companies. It is estimated that Standard Oil owned three-fourths of the petroleum business in the U.S. in the 1890s. In addition to being the head of Standard, Rockefeller owned iron mines and timberland and invested in numerous companies in manufacturing, transportation, and other industries. Although he held the title of president of Standard Oil until 1911, Rockefeller retired from active leadership of the company in 1896. In 1911 the U.S. Supreme Court found the Standard Oil trust to be in violation of the anti-trust laws and ordered the dissolution of the parent New Jersey corporation. The thirty-eight companies which it then controlled were separated into individual firms. In his biography, Study in Power, John D. Rockefeller, Industrialist and Philanthropist, the historian Allan Nevins reports that Rockefeller at that time owned 244,500 of the company's total of 983,383 outstanding shares.