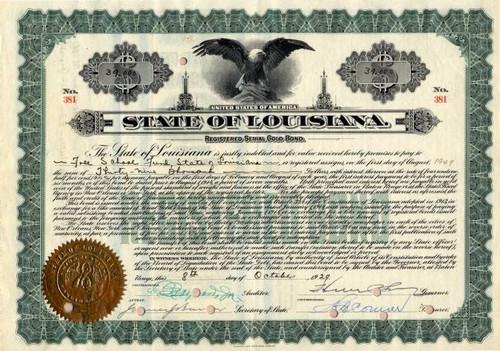 Beautifully engraved State of Louisiana Bond signed by Governor Huey Long issued in October 1929 (Month of the Stock Market Crash). This historic document was printed by the American Banknote Company and has an ornate border around it with a vignette of an eagle. This item has the signatures of Governor Huey Long, and the State Treasurer, Secretary and Auditor, and is over 83 years old.

Governor Huey Long's Signature
Huey Pierce Long, Jr. (August 30, 1893 September 10, 1935), nicknamed The Kingfish, served as the 40th Governor of Louisiana from 19281932 and as a U.S. Senator from 1932 to 1935. A Democrat, he was noted for his radical populist policies. Though a backer of Franklin D. Roosevelt in the 1932 presidential election, Long split with Roosevelt in June 1933 and planned to mount his own presidential bid for 1936. Long created the Share Our Wealth program in 1934 with the motto "Every Man a King", proposing new wealth redistribution measures in the form of a net asset tax on corporations and individuals to curb the poverty and homelessness endemic nationwide during the Great Depression. To stimulate the economy, Long advocated federal spending on public works, schools and colleges, and old age pensions. He was an ardent critic of the Federal Reserve System's policies. Charismatic and immensely popular for his programs and willingness to take forceful action, Long was accused by his opponents of dictatorial tendencies for his near-total control of the state government. A leftist populist who fought the rich, he was preparing to challenge FDR's reelection in 1936 in alliance with radio's influential Catholic priest Charles Coughlin, or run for president in 1940 when Franklin Roosevelt was expected to retire. However, Long was assassinated in 1935; his national movement faded, while his state organization continued in Louisiana. Long expanded state highways, hospitals and educational institutions. His governance has had critics and supporters, debating whether he was a dictator, demagogue or populist. History from Wikipedia and OldCompany.com (old stock certificate research service)