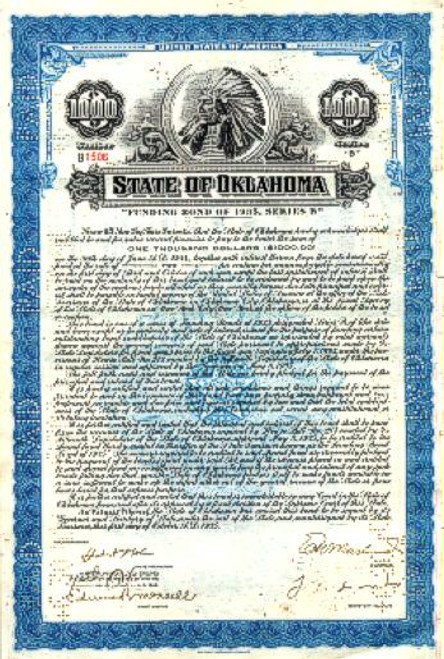 Beautifully engraved certificate from the State of Oklahoma issued in 1935. This historic document was printed by the Security Banknote Company and has an ornate border around it with a vignette of an Indian Chief. This item has the signatures of the Governor, Ernest W. Marland State Treasurer, Hubert Bolen and Chief Justice, Edwin Merrill. Signed on back by State Auditor, C.C. Childers and Attorney General, Mac. Q. Williamson. This item is over 72 years old. 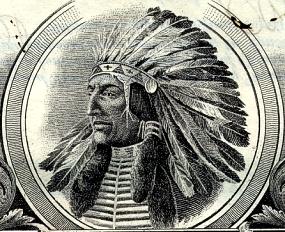 Certificate Vignette
Ernest Whitworth Marland (May 8, 1874 October 3, 1941) was an American lawyer, oil businessman, and politician who served as the tenth Governor of Oklahoma. Ernest Whitworth Marland was born in Pittsburgh, Pennsylvania on May 8, 1874. Marland studied to be an attorney, receiving his LL.B. from the University of Michigan Law School at the age of nineteen in 1893. Marland would move back to Pittsburgh and would step up private practice. Through his experiences as an attorney, Marland became interested in geology and entered the oil industry. At the age of 33, Marland had become a self made millionaire. Unfortunately for Marland, the millions he had amassed were lost following the panic of 1907. By 1908, Marland was broke and without a job. Hoping to start his life over again, Marland moved to the new state of Oklahoma. Once in Oklahoma, Marland settled in Ponca City, Oklahoma and resumed his oil career founding the 101 Ranch Oil Company. Marland was successful in reestablishing his fortune, and by 1920, his fortune was estimated at $85,000,000 (roughly $910,000,000 in modern dollars). In 1920, Marland founded that Marland Oil Company in Ponca City, (which was incorporated in Delaware on October 8, 1920) and would serve as its president. Later, the Marland Oil Company would merge with Continental Oil and Transportation Company (CONOCO). Misfortune would strike Marland again. Due to his company's assosiation with J.P. Morgan, Marland's oil empire would be destroyed and Marland would lose all of his wealth for the second time in his life. Marland was married twice. His first marriage was on November 5, 1903 in Philadelphia, Philadelphia County, Pennsylvania, to Mary Virginia (Collins) Marland, which union lasted until her death on June 6, 1926, in Ponca City, Kay County, Oklahoma. Two years later, on July 14, 1928, he married, also in Philadelphia, Pennsylvania, Lydie (Roberts) Marland, which union lasted until his death on October 3, 1941. Despite his big business background, Marland was not a Republican. Marland's misfortune with Morgan and other eastern monopoly giants gave his a distrust of them, forcing him to register as a Democrat. Marland supported Franklin Delano Roosevelt's New Deal programs from the beginning of FDR's presidency. Through his association with FDR, Marland was elected to the United States House of Representatives to represent Oklahoma's 8th Congressional District in 1932. Marland would be the first Democrat to hold that seat in 15 years. Marland would only serve in Congress for a single term, from 1933 to 1935. Marland declined reelection after he placed his name in the Democratic primaries to succeed Governor William H. Murray. Not only did Marland receive the Democratic nomination but also the election in November to serve as the tenth Governor of Oklahoma. E. W. Marland was inaugurated as Governor. Immediately, Marland instituted a policy that would become known as the "Little New Deal." From the state, the Oklahoma House and Oklahoma Senate were not in favor of his plans. The Oklahoma Legislature was more focused on reducing the state's massive deficit (roughly a quarter of billion dollars in modern currency). Marland, a avid supporter of FDR, stressed the need for the state government to work with the federal government. Despite Governor Marland's efforts, most Oklahoman politicians never fully embraced the New Deal. What the Legislature would accept was a homestead exemption provision to the state's ad valorem taxes, increased school funds, and raised the state sales tax to two percent. Marland introduced legislation that appropriated funds raised by the sales tax to go towards the handicapped, the elderly, and dependent children. At this time, Oklahoma had over 150,000 heads of families that were unemployed and 80,000 heads of families on relief. To help counter this, Marland asked the Fifteenth Legislature for a board to craft policy to develop the physical aspects of the state and to create a more diverse economy. The Legislature responded with the fifteen member State Planning and Resources Board. The Board worked with FDR's Works Progress Administration to create jobs through such things as dam building and tree planting. Even the State Highway Department expanded its road work to create thousands of jobs. Though he did not balance the state's budget, Marland was essential to the creation of both the Oklahoma Highway Patrol and the Interstate Oil Compact. Through the Compact, six oil producing states agreed to practice oil preservation and establish a fair price for petroleum. The governing body of the Compact was a commission, of which Marland was elected to serve as the first president. Marland's term as Governor ended on January 9, 1939. Upon leaving the Governorship, Marland had created jobs for over 90,000 Oklahomans on over 1,300 WPA project. He would return to Ponca City where he tried to recreate the Marland Oil Company. Marland's last event in his political career came when he unsuccessfully ran for the United States House of Representatives in 1940. Within a year losing the election, Marland was dead. He died of a heart condition on October 3, 1941 at the age of 65. He is buried in Ponca City. History from Wikipeida and OldCompanyResearch.com.