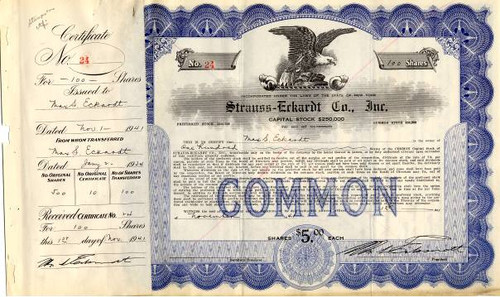 Beautifully engraved certificate from the Strauss-Eckardt Co. Inc issued in 1941. This historic document has an ornate border around it with a vignette of bald eagle standing on a rock. This item is hand signed by the Company's President (Max S. Eckardt) and is over 79 years old. 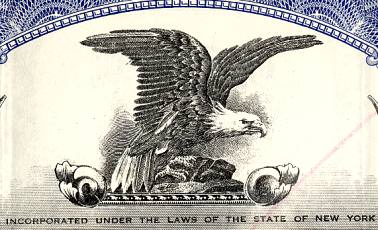 Certificate Vignette
Max Eckardt, a German immigrant decided to produce his own line of ornaments. He opened his company in New York City and sold his ornaments under two different names, Shiny Brite and Max Eckardt & Sons. In 1939 F.W. Woolworth placed a large order and sold them in his stores from two to ten cents each. After World War II, ornaments were being sold in economical boxed sets. Usually a 12-piece set of solid colored ornaments sold for 63 cents or cheaper. A boxed set of 11 balls and one bell shape ornament sold for about 77 cents. Before World War II, most of the glass ornaments that adorned American Christmas trees came from Germany. War in Europe stopped the importing of hand-blown ornaments; but the resourcefulness and ingenuity of a Christmas ornament importer, a chain store manager, and a glass manufacturing company made it possible for Americans to buy shiny glass ornaments to decorate their Christmas trees. In the late 1930s, Max Eckardt of New York City, an importer of German ornaments, saw that the war would soon end his business. Eckardt, together with Bill Thompson of F.W. Woolworth, convinced the Corning Glass Company to mass produce machine-blown Christmas tree balls. Woolworth's offered to place a large order for their chain of stores if Corning could successfully modify its glass ribbon machine, designed to make light bulbs by the thousands, to produce Christmas ornaments. Early in December of 1939, the first 235,000 Corning-blown and machine-lacquered ornaments were shipped to Woolworth's five-and-ten-cent stores. The following year, the glass ribbon machine produced about 300,000 ornaments a day - quite a jump from the typical daily output of 600 for a German glassblower. Corning supplied plain glass ornaments to other companies for decoration. Large cartons of the clear glass balls were shipped to Max Eckardt's newly-built decorating plant in New Jersey, where they were silvered, lacquered, and decorated by hand. Simple forms were the only ornaments available in 1940, but other shapes and sizes were soon introduced. Wartime shortages eventually made it impossible to get either lacquer or silver for decorating, and cardboard caps replaced the metal ones. During this period, Eckardt, who now produced ornaments under the trade name Shiny Brite, decorated the clear glass balls with thin painted stripes in pastel colors. Following the war, Shiny Brite became the largest ornament company in the world, selling millions of round and imaginatively-shaped ornaments decorated with stripes, holiday images, or greetings of the season.