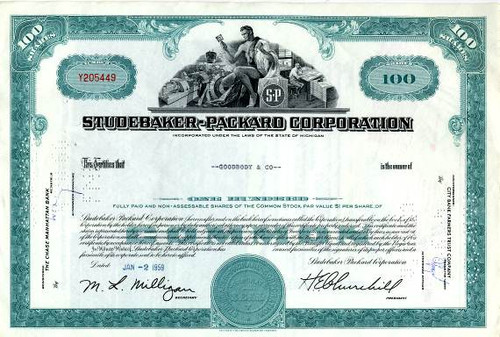 Beautifully engraved certificate from the Studebaker Packard Corporation issued no later than 1963. This historic document was printed by the American Banknote Company and has an ornate border around it with a vignette of an allegorical man sitting in a factory holding a piston with a manufacturing plant in the background. This item has the printed signatures of the Company's President and Secretary, and is over 46 years old.

Certificate Vignette
The last Studebaker was produced on March 17, 1966. The production of the last Studebaker did not mark a definite end of the company or its products. The Studebaker Corporation (the Packard name was officially dropped from the corporate title in 1962) and it did not build cars after March 1966.