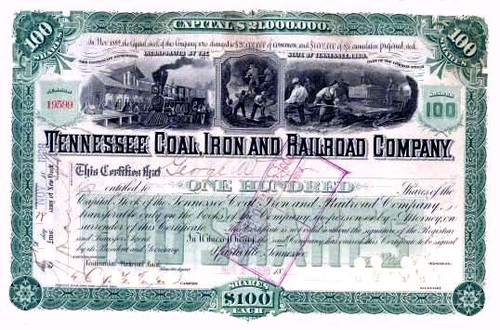 Beautifully engraved hard to find certificate from the Tennessee Coal, Iron and Railroad Company issued issued in 1898 to George W. Ely and signed on the verso. This historic document was printed by the American Banknote Company and has an ornate border around it with a triple vignette of a train and men working in a mine. This item has the hand signatures of the Company's President ( N. Baxter, Jr ) and Secretary ( John F. Fletcher )and is over 105 years old. The certificate has been punch cancelled through the signatures and is in EF Condition. Certificates from the Original Dow Average Company are quite desirable and collectible. 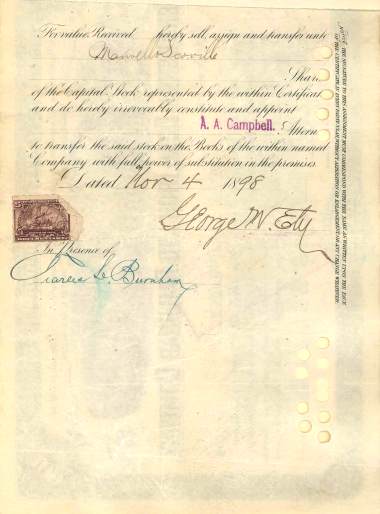 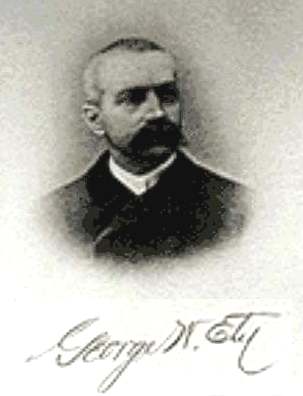 Old Photo of George W. Ely
George Ely was born January 6, 1840, in West Springfield, Massachusetts in 1857, at 17, he enlisted in the Seventh Regiment of the New York National Guard. In 1874, George W. Ely was named Secretary of the New York Stock Exchange and eventually Ely was secretary of the N.Y. Stock Exchange. During World War I Ely was in charge of the Liberty Loan Committee on the big board. As Secretary of the Stock Exchange, he was referred to as the man who owns the Big Board. When anyone violated the rules of the Exchange, Ely who would apply swift judgment. Upon his death the New York Times of August 22, 1922 reported: "No more characteristic figure in the New York Stock Exchange of a quarter century ago could be named than George W. Ely, who died on Wednesday at his country home in Onteora in the Catskills. He became a member of the Exchange in 1869, and in 1874 was elected secretary, serving in that capacity to the end of the century 1900 when he resigned to become President of the Bankers Trust Company. Company History Beginning in the 1870's, blast furnace complexes spread throughout north Alabama, supplied with raw materials from nearby iron ore and coal mines. 1881 The Tennessee Coal and Railroad Co. was renamed to the Tennessee Coal, Iron and Railroad Co. in 1881. The Tennessee Coal, Iron, and Railroad Company was one of the largest industrial firms in the Birmingham area. Ultimately, the company was acquired by U.S. Steel in a merger in 1907 which was approved by Teddy Roosevelt. Below is a list of the first Dow Industrials companies from 1896: American Cotton Oil American Sugar American Tobacco Chicago Gas Distilling & Cattle Feeding General Electric Laclede Gas National Lead North American Company Tennessee Coal, Iron and Railroad Company U.S. Leather pfd. U.S. Rubber