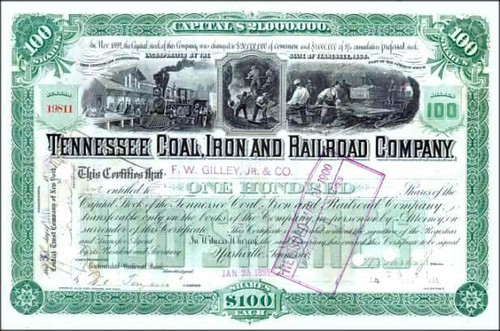 Beautifully engraved stock certificate from the Tennessee Coal, Iron and Railroad Company issued no later than 1901. This historic document was printed by the American Banknote Company and has an ornate border around it with a triple vignette of a train and men working in a mine. This item has the hand signatures of the Company's officers. The certificate has been punch cancelled through the signatures and is in EF Condition and is over 116 years old. Certificates from the Original Dow Average Company are quite desirable and very collectible.