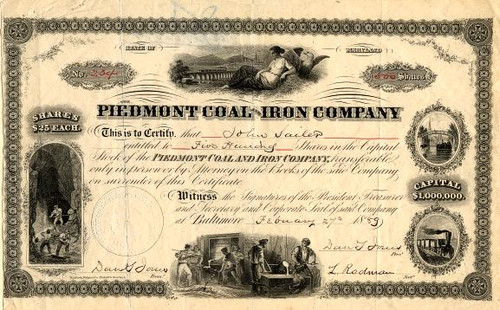 Beautiful certificate from the Piedmont Coal and Iron Company issued in 1889. This historic document was printed by Danforth, Wright & Company and has an ornate border around it with a vignette of a woman reclining with eagle. foundry on bottom. Mine shaft, left. Train and canal barge, right. This item has the signatures of the Company's President, Dan Jones and Secretary, L. Rodman and is over 118 years old. 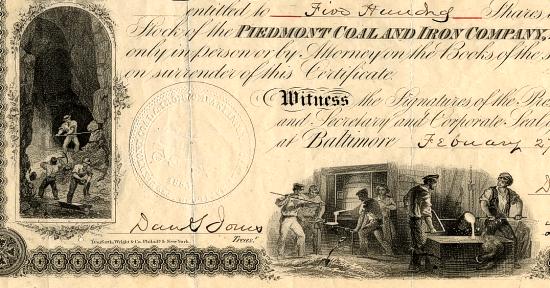 Certificate Vignette
State of Maryland: Passed February 3, 1858. AN ACT amendatory of an act entitled, an act to incorporate the Pickell Mining Company, passed at January session, eighteen hundred and fifty-three, chapter 407, and to change the name of the said company to the Piedmont Coal and Iron Company. Name changed. SECTION 1. Be it enacted by the General Assem- bly of Maryland, That the name of the Pickell Mining Company shall be changed to that of the Piedmont Coal and Iron Company, whenever at any general meeting of the stockholders of said company, this act shall he accepted and approved by the holders of a majority of the whole stock of the company. SEC. 2. And be it enacted, That from and after the acceptance and approval of this act, as pro- vided in the 1st section, the said corporation shall be called and known as the Piedmont Coal and Iron Company, and by that name may sue and he sued, and shall have, use and exercise all the rights and privileges given by the original char- ter, and any supplements thereto; and shall be liable for all the debts, contracts and engagements of said corporation, as fully in every respect as if this act had not been passed. To be known as the Pied- mont Coal and Iron Company. SEC. 3. And be it enacted, That the Legislature reserves the right to alter, amend or repeal this act at pleasure. Reservation. SEC. 4. And be it enacted, That this act shall take effect from the time of its passage.