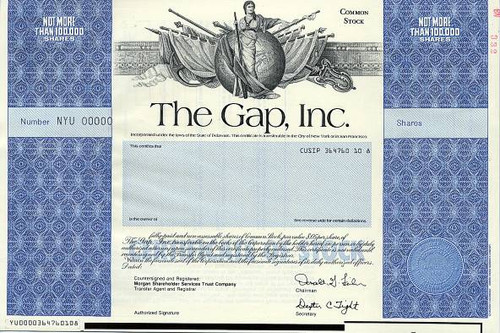 Beautiful certificate from the Gap, Inc. This historic document was printed by the Security - Columbian Company and has an ornate border around it with a vignette of an woman standing in front of a glove with various sheets and curtains sticking out on all sides. This item has the signatures of the Company's Chairman, Donald Fisher and Secretary.

Certificate Vignette
The Gap, Inc. (NYSE: GPS) is an American clothing and accessories retailer based in San Francisco, California, and founded in 1969 by Donald G. Fisher and Doris F. Fisher. The company has five primary brands: the namesake Gap banner, Banana Republic, Old Navy, Piperlime and Athleta. As of September 2008, Gap, Inc. has approximately 150,000 employees and operates 3,465 stores worldwide. Gap, Inc. remains the largest specialty apparel retailer in the U.S., though it has recently been surpassed by the Spanish-based Inditex Group as the world's largest apparel retailer. Despite its publicly-traded status, the Fisher family remains deeply involved in Gap, Inc.'s business and collectively owns a significant portion of the company's stock. Donald Fisher served as Chairman of the Board until 2004 and remained on the board until his death on September 27, 2009. His wife and their son, Robert J. Fisher, also serve on Gap's Board of directors. Robert Fisher succeeded his father as chair in 2004 and also took over as president and CEO on an interim basis following the resignation of Paul Pressler in 2007. Glenn K. Murphy is the current CEO of the company. Previous Gap, Inc. CEOs include Millard Drexler and Paul Pressler. 19691980 On August 21, 1969, Donald and Doris Fisher opened the first Gap store on Ocean Avenue in San Francisco. The store's merchandise consisted of Levi's and LPs. The Fishers had raised $63,000 to open the store, and in one year, Gap's sales had reached $2 million. Gap opened its second store in San Jose, California in 1970. Along with this second store, Gap established its first corporate headquarters in Burlingame, California, employing only four employees. Gap continued to expand rapidly and by 19721973, had grown to over 25 stores and had expanded to areas outside of California and was entering the East Coast market with its store in Voorhees, New Jersey. In 1974, Gap began to sell private label merchandise in its stores. Brands Banana Republic, formerly a small retailer selling safari-themed clothing, was purchased by the company in 1983, and eventually was rebranded as an upscale clothing retailer in the late 1980s. Old Navy was launched in 1994, as a value chain with a specialty flair. Forth & Towne, the company's fourth traditional retail concept, was launched on August 24, 2005, featuring apparel targeted toward women 35 and older. On February 26, 2007 after an 18-month trial period, Forth & Towne was discontinued, and the 19 stores were closed. A fifth brand, the online footwear retailer Piperlime, was created in 2006. A sixth brand, Athleta, a women's athletic wear line was added in 2009. History from Wikipedia and OldCompany.com (old stock certificate research service).