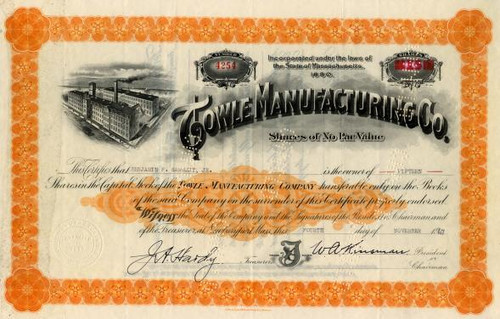 Beautifully engraved certificate from the Towle Manufacturing Company of Newburyport, Massachusettes issued in 1948. This historic document has an ornate border around it with a vignette of the old Towle factory. This item is hand signed by the company's President, E. Gordon) and Treasurer, C. W. Sanders and is over 58 years old. 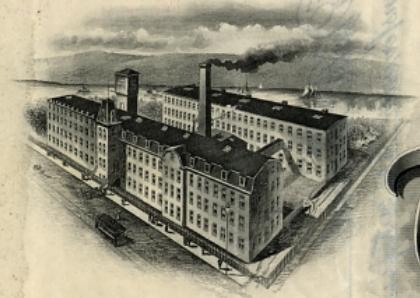 Certificate Vignette
Towle Silversmiths was formed as the Towle Manufacturing Company in 1880 in Newburyport, Massachusetts. This company is best known for its sterling flatware patterns and two of their more popular patterns were "Old Colonial" and "Georgian". In 1682 William Moulton II (1664-1732) left the family farm in Hampton, New Hampshire and settled near the Merrimac River in a section of Newbury, Massachusetts that was later to become Newburyport. In 1690, William was the first to attempt silversmithing in Newbury, thus gaining the title of the first silversmith in a long lineage of craftsmen. Six consecutive generations of Moulton silversmiths followed. Towle Silversmiths represents centuries of silversmithing without interruption on the banks of the Merrimac River in Newburyport. The Towle tradition of craftsmanship is still being carried on today. A company whose heritage spans a time period longer than that of the United States, Towle Silversmiths remains a leader in the silver industry. Dating back to 1690, its history is rich, impeccable, and established. Towle manufactures sterling, stainless and silverplated flatware, sterling and silverplated holloware and giftware, in addition to sterling and silverplated ornaments, accessories, and cutlery. The over 50-year popularity of Towle's Old Master pattern speaks for itself. As you browse through our web site, you will clearly see a company whose tradition shines through the quality of its products. Towle was acquired by Syratech Corporation. The Syratech Corporation makes tabletop, giftware, and seasonal items. Its tabletop and giftware lines include sterling silver, silver-plated, and stainless steel flatware and hollowware under the Wallace Silversmiths, Towle Silversmiths, and International Silver Company brand names. Seasonal products include Christmas ornaments, trim, and lighting (Rauch, Silvestri, and Holiday Workshop brands.) Other items include picture frames, glassware, crystal, and ceramics. Syratech sells nationwide through warehouse clubs, drug stores, department stores, and specialty shops. Towle Manufacturing was also the last owner of the Tiffin Glass Company.