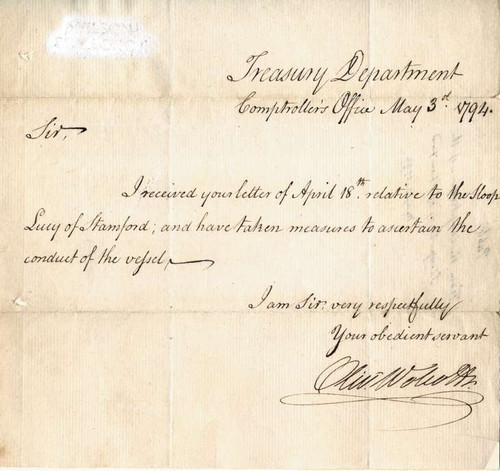 Oliver Wollcott Jr. 1794 Signed Treasury Department Comptroller's Office document. This item has the signature of Oliver Wollcott Jr. and is over 225 years old. The document reads: " I received your letter of April 18th relative to the sloop Lucy of Stamford and have taken measures to ascertain the conduct of the vessel. I am very respectfully Your obedient servant O7 3/4" x 7 1/4". Two spindle holes at left. Abrasion spot at upper left. a few archival tape repairs on the back. USRC Scammel was one of the first ten cutters operated by the United States' Revenue Cutter Service (later to become the US Coast Guard). Scammel seized the Lucy of Stamford for "illegal registration" which was eventually condemned and sold, along with her cargo for $750. Oliver Wolcott, Jr. (January 11, 1760 June 1, 1833) was United States Secretary of the Treasury from 1795 to 1800 and the 24th Governor of Connecticut from 1817 to 1827. Born in Litchfield, Connecticut, Wolcott was the son of Oliver Wolcott, Sr. and Laura Collins Wolcott. He was able to graduate from Yale University in 1778, despite serving in the Continental Army from 1777 to 1779. He later read law and studied at Litchfield Law School to be admitted to the bar in 1781. He was a clerk in Connecticut's Office of the Committee on the Pay Table from 1781 to 1782, and a commissioner on that committee from 1782-1784. Wolcott was appointed in 1784 as one of the commissioners to mediate claims between the U.S. and the state of Connecticut. After serving as state comptroller of Connecticut from 178890, he was named auditor of the federal treasury, and became Comptroller of the Treasury in 1791. He was appointed Secretary of the Treasury by George Washington in 1795 to succeed Alexander Hamilton. In 1799, as Secretary of the Treasury, he designed the United States Customs Service flag. He resigned in 1800 due to unpopularity, and a particularly vitriolic campaign against him in the press in which, among other things, he was falsely accused of setting fire to the State Department building. He was appointed as a committee member pertaining to the construction of the monument at Groton Heights, commemorating the battle fought there on September 6th, 1781. Wolcott was one of President John Adams' so-called "midnight judges", appointed to a new seat as a federal judge on the United States circuit court for the Second Circuit, created by 2 Stat. 89, almost on the eve of Jefferson's inauguration in 1801. Nominated by Adams on February 18, 1801, Wolcott was confirmed by the United States Senate on February 20, 1801, and received his commission the same day. Wolcott's service was terminated on July 1, 1802, due to abolition of the court. From 1803 to 1815 he operated in private business in New York City, afterwards retiring to Litchfield and farming. Wolcott lost a campaign for Governor of Connecticut in 1816, running as a "Toleration Republican", against the Federalist Party to which he had once belonged. He ran again in 1817 and won, following in the footsteps of his father and grandfather as Governor, and serving ten years in the post. His tenure was noted for the economic growth and moderate policies that attended it. Additionally, he presided over a convention that created a new state constitution in 1818 and disestablished the Congregationalist Church. Nevertheless, he was defeated for reelection as Governor of Connecticut in 1827. In late May 21, 1796 one of Martha Washington's slaves, Oney Judge, escaped from the Executive Mansion in Philadelphia, where she lived with the Washingtons during his presidency, serving as Martha's chambermaid. As Secretary, Wolcott was George Washington's intermediary in getting the Collector of Customs for Portsmouth, New Hampshire, Joseph Whipple, to capture and send Martha Washington's runaway slave, Oney Judge (sometimes Ona), to Mount Vernon, where she had begun serving the Washingtons. Whipple met with Oney, discussed why she had escaped and tried to ascertain the facts of the case. After she told him she did not desire to be a slave again, Whipple refused to remove Ms Judge against her will, saying that it could cause civil unrest due to abolitionists, and recommended the President go through the courts if needed. In their correspondence, Washington said that he wanted to avoid controversy, so he did not use the courts to take advantage of the method he himself had signed into law under the 1793 Slave Act. Wolcott died in New York City and is interred at East Cemetery in Litchfield. Wolcott was the last surviving member of the Washington Cabinet. The town of Wolcott, Connecticut was named in honor of Oliver Jr. and his father Oliver. History from Encyberpedia and OldCompany.com (old stock certificate research service)