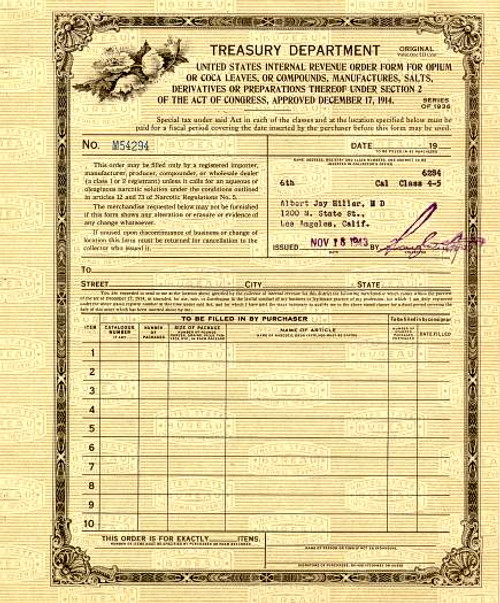 Treasury Department Internal Revenue Opium Order form used when Opium was legal by issuing a prescription issued no later than 1948. The form was used to track the opium sales for purposes of a assessing a special tax in accordance with an Act of Congress approved December 17, 1914. The form has an ornate border with a picture of a Coca Leaves in the upper left corner.

Certificate Vignette
There were no legal restrictions on the importation or use of opium until the early 1900s. In the United States, the unrestricted availability of opium, the influx of opium smoking immigrants from the Orient, and the invention of the hypodermic needle contributed to the more severe variety of compulsive drug abuse seen at the turn of this century. In those days, medicines often contained opium without any warning label. Today there are state, federal and international laws governing the production and distribution of narcotic substances. Although opium is used in the form of paregoric to treat diarrhea, most opium imported into the United States is broken down into its alkaloid constituents. These alkaloids are divided into two distinct chemical classes, phenanthrene and isoquinoline. The principal phenanthrene is morphine, codeine and thebaine, while isoquinoline has no significant central nervous system effect and is not regulated under the CSA. The term narcotic, derived from the Greek word for stupor, originally referred to a variety of substances that induced sleep. In a legal context, narcotic refers to opium, opium derivatives and their semisynthetic or totally synthetic substitutes. Cocaine and coca leaves, which are classified as "narcotics" in the Controlled Substances Act (CSA), are technically not narcotics and are discussed in the section on stimulants.