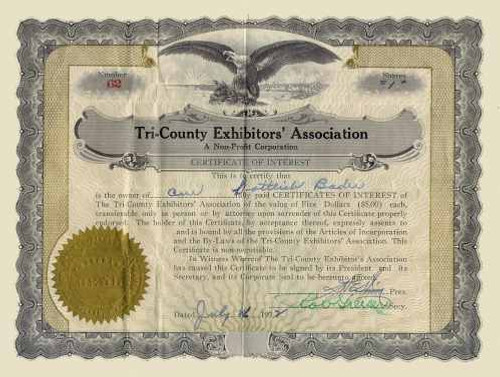 Beautifully engraved certificate from the Tri-County Exhibitors' Association issued in 1932. This historic document has an ornate border around it with a vignette of an eagle perched upon a rock with its wings spread with the ocean and city in the background. This item is hand signed by the company's president (H E. Timm ) and secretary (Robert Greiser ) and is over 69 years old. Tri-County Fair In 1926, sponsored by the Association of Commerce, a group of Wishek business men and a group of leading farmers of the area, realizing the need for better breeds of livestock and better strains of grain organized the Tri-County Exhibitor's Association. It was also an effort to bring closer cooperation between the farmers of our area and the people of Wishek. H E. Timm served as its president for many years and Robert Greiser was its secretary. The first Fair was held in September, 1927, with tents being used to house the exhibits. Increased interest by town and country folk alike assured the directors of the Fair's success. In 1933 an 80-acre fair grounds was purchased from the State Land Department located on the hill one mile west of Wishek. Three permanent fair buildings were then constructed. Successful fairs were held annually and without interruption from 1927 until 1941. Fair showings were discontinued during the critical war years of 1942 to 1946, inclusive, but 1947 saw the return of the fair as an annual fall festival in the community. In 1948, the following was written about H. E. Timm and his family: Henry Elmer Timm has been a resident of Wishek for the past forty-one years and a statement of his connections and associations with business and civic affairs in Wishek and in McIntosh County during those years indicates that he has been one of the substantial men in the community, being a type of man who is never lacking in some useful connection and relationship with his community. Mr. Timm was born in Franklin County, Iowa, October 22, 1885, the son of Albert C. and Mary (Nicklas) Timm. His father was a native of Wisconsin and his mother a native of Pennsylvania. Mr. Timm was educated in the public schools of Ackley, Iowa, graduating from high school in 1905 and for two years attended Cornell College at Mt. Vernon, Iowa. He came to Wishek as principal of its schools for the year 1907-1908. In 1908 he became bookkeeper for the firm of Herr Brothers & Company, later homesteaded near Green Lake in McIntosh County, and in 1911 entered the employ of the First State Bank of Wishek. He served as Assistant Cashier of said bank until 1919 when he was elected Cashier, which position he held until 1935. He was also Secretary-Treasurer of the Bankers Loan Company of Wishek and conducted a real estate and insurance business in connection with the bank. Since quitting bank work, he has engaged in the real estate and insurance business. Mr. Timm was an official of the Village of Wishek continuously for eighteen years, from 1912 till 1930, and when, in 1930, the Village was incorporated as a City, he was elected as its first Mayor. In 1913 he assisted in the organization of the Wishek Volunteer Fire Department and served as its first Chief. He was also one of the organizers of the Wishek Association of Commerce and served as a Director for ten years. He was also interested in the organization of the Tri County Fair Association and served for years as its President. Mr. Timm is a Republican and in 1930 was elected state representative from the Thirty-sixth Legislative District, serving in the 1931 Session of the North Dakota Legislature. He is also prominent in the Independent Order of Odd Fellows of North Dakota, is a Past Grand Master and Past Grand Secretary of that Order, and is serving his twenty-fifth year as a state trustee of the Odd Fellows Home at Devils Lake. He also holds membership in Linton Lodge No. 98, A. F. & A. M., and is an elder in the Presbyterian Church. Mrs. H. E. Timm, whose maiden name was Carolyn Gruye, was the daughter of Philip and Bertha Gruye. She was born in New Ulm, Minnesota, on November 20, 1886. She grew to womanhood in Winthrop, Minnesota, attended the public schools and graduated from Winthrop High School in 1903, then attended the State Normal at Mankato, Minnesota. After five years of teaching in Minnesota schools, she came to Wishek in 1909 and taught the intermediate grades in the Wishek schools for two years. Mr. and Mrs. Timm were married at Winthrop, Minn., on December 28, 1910. They had two sons, Ralph Elmer, born October 28, 1911, who died in infancy, and Elbert Clifford, born April 11, 1917, who is now an oil geologist with Socony-Vacuum Oil Company in Louisiana. Mrs. Timm passed away on July 28, 1947. Mr. Timm still makes his home in Wishek. During her thirty-eight years of residence in Wishek, Mrs. Timm was active in civic, fraternal and church organizations. She held membership in the Civic League, the Legion Auxiliary and showed a deep interest in activities of the Boy Scouts, the Girl Scouts and the Brownie Scouts. She was a member of the Presbyterian Church and active in its Ladies Aid. She was a charter member of Golden Rod Rebekah Lodge #90 when it was instituted in 1914 and served as the first Noble Grand of said Lodge. She also held membership in the Order of Eastern Star at Linton. No. Dak. This historical was obtaind from the Wishek ND, Golden Jubilee, 1898-1948 Published by the Odessa Digital Library - 22 Jul 1995 http://pixel.cs.vt.edu/library/odessa.html