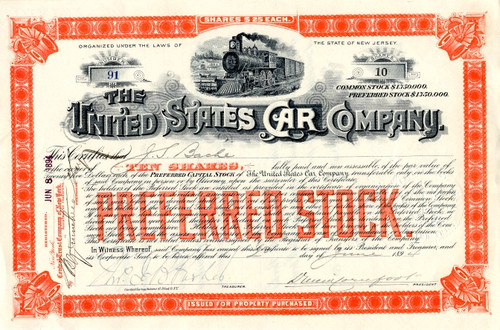 Beautiful certificate from the United States Car Company issued in 1894. This historic document was printed by Charles A. Searing, Stationer, and has an ornate border around it with a vignette of a train traveling through the country. This item has been hand signed by the Company's President, and Treasurer, and is over 117 years old. Issued to and handsigned on the reverse by Jules S. Bache. 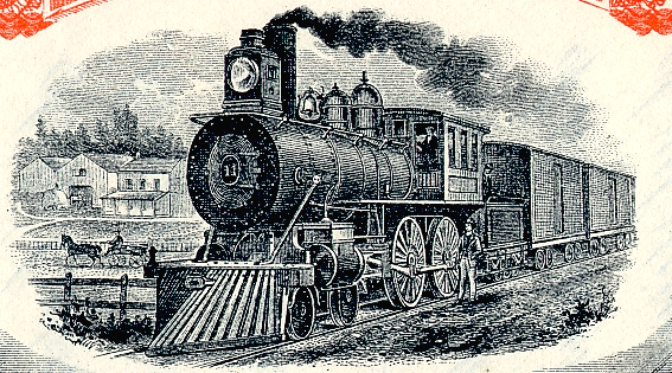 Certificate Vignette
Jules Semon Bache (November 9, 1861 March 24, 1944) was a German-born American banker, art collector and philanthropist. Born in Germany, as a young boy his family emigrated to the United States, settling in New York City. In 1881, he started work as a cashier at Leopold Cahn & Co., a stockbrokerage firm founded by his uncle. In 1886 he was made a minority partner and in 1892 took full control of the business, renaming it J. S. Bache & Co. Jules Bache built the company into one of the top brokerage houses in the United States, outranked only by Merrill Lynch. In the process, he became an immensely wealthy individual, a patron of the arts, and a philanthropist. During World War I, Jules Bache donated money to the American Field Service in France and his wife was the honorary treasurer of the "War Babies' Cradle," a charity that provided aid for mothers and children in distress in war-torn Northern France and Belgium to provide them with food, clothing, heating fuel and medical care. Jules Bache was a shareholder of a number of prominent corporations and sat on the board of directors of many of them. Among his personal holdings, Bache had sizeable interests in Canadian mining companies. His equity in these companies were held by his Bahamas based corporation that allowed him to legally avoid some of the high personal U.S. surtaxes, a fact which he would be publicly criticized for as a result of the Federal investigations during the 1930s into the causes of the Wall Street Crash of 1929. Bache however believed that high taxation was a hindrance to economic growth and published a booklet titled "Release business from the slavery of taxation." A major shareholder in Dome Mines Limited, Bache served as company president from 1919 until 1942 and was Chairman of the Board at the time of his passing. After the brokerage firm of Dillon, Read & Company acquired the Dodge Brothers Automobile Company in 1923, Jules Bache acquired a substantial position in Chrysler Corporation. In addition to his high profile in the business world, Jules Bache would also become well known for his art collecting that received much press attention in 1929 when he purchased the portrait of "Giuliano de Medici," then attributed to Raphael. He would acquire numerous other important works including those by or attributed to Rembrandt, Titian, Albrecht DÃ¼rer, Diego VelÃ¡zquez, Gerard David, Giovanni Bellini, and Sandro Botticelli, amongst others. In 1937 he opened his magnificent art collection to the public, and in 1943 gifted some of his works to the Detroit Institute of Arts. In 1944, the remainder of his collection was given to the Metropolitan Museum of Art in New York. A supporter of American theatre and Broadway, in 1941 Jules Bache helped found the New York branch of the Escholier Club. Jules Bache died in 1944 in Palm Beach, Florida and was interred in the Woodlawn Cemetery in the Bronx, New York. His tomb is a replica of the Temple of Isis at Philae History from Wikipedia and OldCompany.com (old stock certificate research service).