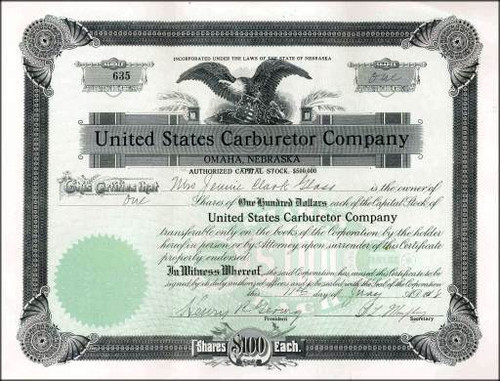 Beautifully engraved certificate from the United States Carburetor Company issued in 1918. This historic document has an ornate border around it with a vignette of an eagle. This item is hand signed by the Company's President (Henry R. Gering) and Secretary and is over 90 years old.

Certificate Vignette
Henry R. Gering had ownership in the A.A.A.Omaha and Des Moines car race tracks, among other ventures. He was also the President of the Des Moines Speedway in 1915. During the year is 1915, and auto racing is still in its infancy. The "Indy 500" is a four year old event yet to earn its now legendary distinction. During this time, racing surfaces varied. That is, tracks were constructed of materials such as dirt, sand, concrete and, believe it or not, wood. Des Moines Speedway was one of several wooden speedways to be constructed between 1910 and 1928. Other cities having board tracks included, but were not limited to, Cincinnati, Omaha, Uniontown, Altoona, Chicago, Kansas City, Beverly Hills, Miami and Sheepshead Bay. None survive today. Most were built by the Prince Speedway Company. The Des Moines Speedway was a mile in circumference. The straight aways were pitched ten degrees and the turns forty degrees. Speeds of over 100 miles per hour were assured by designers. The face of the speedway was built of 2x4's laid on edge. It was reported that 210 laborers were employed. In addition, more than three million feet of lumber and 45 tons of nails were required in construction of the great speedway at a cost of ninety-thousand dollars. The facility included a grandstand with seating capacity of ten thousand and an infield capacity of six thousand automobiles. The infield area, where the races could be watched while seated in automobiles, was reached by subway at the northeast turn of the track. The Des Moines Speedway only held two major events in its short history: a 300 mile race in 1915 and in 1916 a 150 mile race (a 50 mile open event was held the same day following the big race). While the 1915 event would be marred by tragedy, the 1916 events went off without any significant incidents. A smaller purse "outlaw" race was held on Decoration Day in 1916, primarily for Iowa drivers, and featuring Bill Barndollar and local champion Red Shafer. Unfortunately for the speedway, 1916 was the final year of racing. Many of the big name drivers were joining the war effort. In addition, attendance never again reached that of its glorious opening in 1915. In 1917, after a failed attempt by J. Alex Sloan to bring I.M.C.A. to the speedway, and the speedway company being named as defendant in a lawsuit, the track was dismantled and the wood was sold throughout central Iowa to satisfy creditors. It is rumored that many of the barns and other wooden buildings in the area built from 1917 to 1918 still stand with timber from the old board raceway. Special thanks for the historical information from Larry Ball, Jr. at http://www.boardtrack.com.