Beautifully engraved military payment check from the First National Bank United States Depositary dated no later than 1905. This historic document was printed by the American Banknote Bureau Engraving & Printing Company and has an ornate border around it with a vignette of Edwin M. Stanton. This item is hand signed by the paymaster and is over 100 years old. 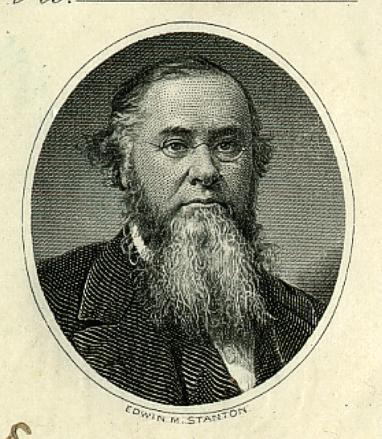 Certificate Vignette
Edwin McMasters Stanton (December 19, 1814 December 24, 1869), was an American lawyer, politician, and Secretary of War through most of the American Civil War and Reconstruction era. Stanton was born in Steubenville, Ohio, the eldest of the four children of David and Luvy (Norman) Stanton. His father was a physician of Quaker stock. Stanton began his political life as a lawyer in Ohio and an antislavery Democrat. After graduating from Kenyon College in 1833, he was admitted to the Ohio bar in 1836, and practiced law in Steubenville until 1847, when he moved to Pittsburgh, Pennsylvania. In 1856 Stanton moved to Washington, D.C., where he had a large practice before the Supreme Court. In 1859, Stanton was the defense attorney in the sensational trial of Daniel E. Sickles, a politician and later a Union general, who was tried on a charge of murdering his wife's lover (Philip Barton Key, son of Francis Scott Key), but was acquitted after Stanton invoked the first use of the insanity defense in U.S. history. In 1860 he was appointed as Attorney General by President James Buchanan. He retired from office at the end of Buchanan's term. Stanton was politically opposed to Republican Abraham Lincoln in 1860 and referred to him as the "original gorilla". After Lincoln was elected president, Stanton agreed to work as a legal adviser to the inefficient Secretary of War, Simon Cameron, whom he replaced on January 15, 1862. He accepted the position only to "to help save the country." He was a very effective in administering the huge War Department, but he devoted considerable amounts of his energy to the persecution of Union officers whom he suspected of having traitorous sympathies for the South and the Civil War was a time of great political intrigue within the U.S. Army. The president recognized Stanton's ability, but whenever necessary Lincoln managed to "plow around him." When pressure was exerted to remove the unpopular secretary from office, Lincoln replied, "If you will find another secretary of war like him, I will gladly appoint him." During this period Stanton's opinion of Lincoln changed. At Lincoln's death Stanton remarked "Now he belongs to the ages." and lamented "there lies the most perfect ruler of men the world has ever seen." Stanton continued to hold the position of secretary of war under President Andrew Johnson until 1868. His relations with the president were not good and Johnson attempted to remove Stanton from the Cabinet, in violation of the Tenure of Office Act. This was the primary count for which Johnson was impeached. After this Stanton resigned and returned to the practice of law. The next year he was appointed by President Grant to the Supreme Court, but he died four days after he was confirmed by the U.S. Senate. He died in Washington, D.C., and is buried there in Oak Hill Cemetery. History from Wikipedia.