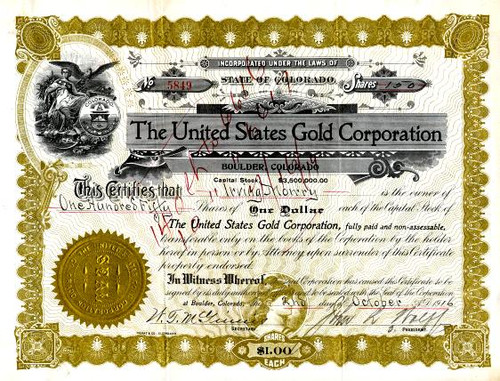 Beautifully engraved certificate from the United States Gold Corporation dated 1916. This historic document was printed by the Mount & Company, Cleveland and has an ornate gold gilt border around it with a vignette of Colorado's State Seal. This item has the signatures of the Company's VP (John R. Wolff) and Secretary (W.T. McGinnis), and is over 89 years old. 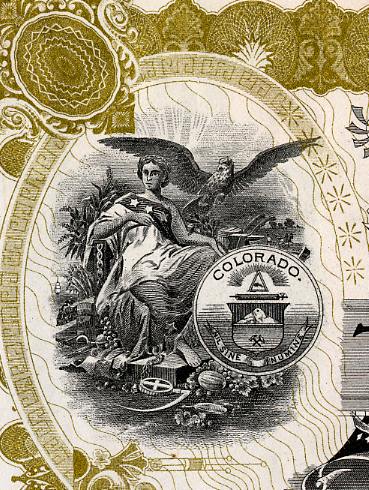 Certificate Vignette
The company owned 300 acres in the Arapahoe copper-gold belt and was presumed idle in 1908. Net receipts for 1915 were $626. As reported by Weed in 1916, the property included the Klondike group, 225.93 acres, the Sphinx group, 22 mining claims and the Livingston group, 50 acres in the Sugar Loaf district. This company also owned the entire capital stock of the U.S. Reduction Co., which owns the mill. Claims show fissure veins in porphyry, carrying gold ore. In 1915, 34 tons of ore were shipped to Denver smelters, which netted $1414. The company reported bullion to the amount of $15,086 were shipped to the U.S. Mint in Denver in 1916. The mill was reported to have been treating 45 tons daily and was expected to handle 100 tons daily by at the end of 1916. "After 13 years of intermittent development, and lurid advertising, company is at last producing. ...The corporation is not looked upon favorably and investors are advised to take company statements with a gain of salt," comments Weed. In 1916 it was the largest of the gold mines in the county, but during the 1917 the yield was about $75,000 from 15,000 tons of ore, since which time the company has been idle. (Ref: Copper Hdbk, 1908, p1362; Mines Hdbk, 1916, p1153; Mines Hdbk, 1924, p817. - Holabird)