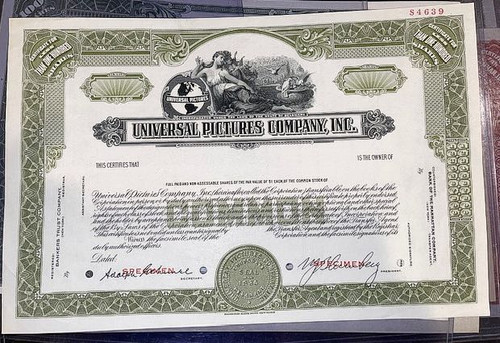 Nate Blumberg. Born in New York City, Blumberg was an adviser with the CBS Broadcast group when Universal Pictures owner Carl Laemmle hired him to head the studio's management and finance departments in the mid-1930s. With his leadership and guidance for production manager Cliff Work, he made Universal Pictures a first run market with A-class bankable stars, for movie and film projects. He served as Universal Pictures president (1938-52) and as chairman of the board (1952-60). He died while in office at age 66 in Hollywood, California. 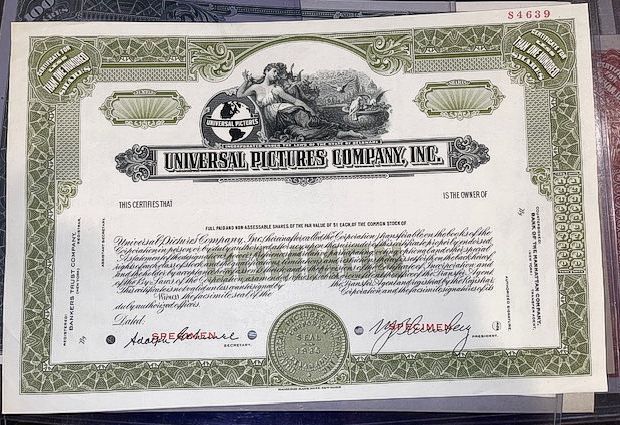 On January 17, Carl Laemmle is born in Laupheim, Germany, the tenth child of Rebecca and Nathanael Laemmle. In 1884 the boy immigrates to America.

On February 24, Carl Laemmle, now 39 years old, opens the White Front Theatre in Chicago, the first of a string of nickelodeons.

In November, Laemmle founds the Laemmle Film Service, a film distribution company that by 19l9 was servicing a majority of cinemas in the Midwest and Canada.

In June, Laemmle founds the Yankee Film Company, soon to be named the Independent Moving Picture Company of America (IMP) in New York. IMP takes the lead in defying the Motion Picture Patents Trust, a monopoly attempting to control all phases of film production, distribution, and exhibition.

On October 25, IMP’s first film production, Hiawatha, directed by William V. Rancous on location in Coytesville, N.J., is released by the studio.

The Universal Animated Weekly, the studio’s first newsreel is founded.

Isadore Bernstein purchases 230 acre Taylor Ranch in North Hollywood for $165,000, which had been used by Universal for outdoor scenes since 1912 ("Universal Ranch"). Ground is broken on June 18 for Universal Studios, and production is in full swing by September. Damon and Pythias becomes the first feature film shot at Universal City.

On March 15, 1915, Universal City celebrates its gala opening. For 25¢, the public is allowed to observe the set of movies in production.

Where Are My Children?, written and directed by one of Hollywood’s earliest female filmmakers, Lois Weber, grosses over $3 million.

Universal opens its first "talking picture," Melody of Love. The Universal tour is discontinued in 1930, due to the need for quiet sets.

Walter Lantz, creator of Oswald the Rabbit, Woody Woodpecker, and Andy Panda, joins Universal, where he will remain as an animator and later, independent producer for almost sixty years, except for a brief stint at U.A. (1947-48). In 1984, MCA acquires Walter Lantz Productions.

In July, American Decca Recording Company is formed by Jack Kapp and Edward Lewis, founder in 1929 of the Decca Record Co., Ltd. (England).

MCA receives a blanket waiver from the American Federation of Musicians, permitting them to act in the dual capacity as talent bookers and program producers, allowing them to package radio shows with their own bands.

On March 14, Carl Laemmle is forced out by Universal’s creditors and a financial group around Standard Capital takes over the studio for $4.5 million. Charles R. Rogers becomes head of production, and J. Cheever Cowdin, President.

Three Smart Girls, directed by Henry Koster, introduces fourteen-year-old Deanna Durbin. The film earns $1.6 million on an investment of $261,000. Over the next twelve years Durbin will star in 21 box office hits, contributing immeasurably to the studio’s bottom line.

Deanna Durbin wins a Special Academy Award "for bringing the spirit and personification of youth to the screen."

W.C. Fields stars in You Can’t Cheat an Honest Man, the first of four comedies the actor will make at Universal.

A minor radio team, Bud Abbott and Lou Costello, make A Night in the Tropics, which catapults the duo to such fame that many subsequent titles have their name in them.

On October 3, Jules Stein and MCA open the "Hollywood Canteen," a nightclub for servicemen, where the hosts are movie stars who are donating their time. The Hollywood Canteen Foundation had collected over $500,000 when the Canteen finally closed its doors on November 22, 1945.

Sherlock Holmes and the Voice of Terror is the first of twelve Universal films made between 1942 and 1946, featuring Basil Rathbone as the famous sleuth and Nigel Bruce as his sidekick, Dr. Watson.

MCA incorporates Revue Productions to produce live shows. In 1950 the dormant company is reborn as MCA’s television subsidiary. Its first show was Armour Theatre, a TV version of radio’s Stars Over Hollywood.

Hal Mohr and W. Howard Greene win Academy Awards for "Best Color Cinematography" for The Phantom of the Opera.

Universal’s "Youth Unit," which had been turning out a steady stream of swing music films during WWII starring Gloria Jean or Donald O’Connor, is disbanded.

MCA’s Lew Wasserman negotiates a percentage deal between Universal and Jimmy Stewart, 50% of net on Winchester ’73, and revolutionizes the business. The film is followed by Bend of the River (1952), both of which revitalize Universal’s western genre production.

On July 23, Screen Actors Guild President Ronald Reagan sends MCA a letter allowing it to produce television shows and simultaneously represent talent in those shows. In April 1953, the Writers Guild grants MCA a similar waiver, allowing them to represent screenwriters and produce their TV scripts through Revue.

Creature From the Black Lagoon is Universal’s entry into the 3-D and science fiction film market and is followed by such classics as The Incredible Shrinking Man (1957).

Alfred Hitchcock Presents wins an Emmy for "Best Editing of a Television Film".

On December 18, Universal sells its 367 acre studio backlot for $11.25 million to MCA, then leases back studio space at $1 million a year.

MCA signs a deal with Grey Line Bus Tours for "Dine with the Stars," allowing buses to drive around the lot and have lunch in the Commissary.

MCA purchases Decca Records and with it, Universal Pictures, leaving Milton Rackmil and Edward Muhl in charge, while Dr. Jules Stein (Board Chairman) and Lew Wasserman (President) guide MCA. As a result of a consent decree with the Justice Department, MCA divests itself of its talent agency business.

Gregory Peck receives an Academy Award for "Best Actor" in the film adaptation of Harper Lee’s To Kill a Mockingbird.

In July, the Universal Studios Tour is opened in conjunction with Glamour Trams. The initial tour is operated with two drivers, two guides, and one ticket seller. The price of admission is $6.50 for two adults and a child.

MCA acquires Alfred Hitchcock’s Shamley Prods., including rights to Psycho and all of Hitchcock’s television work.

Seventeen-year-old Steven Spielberg begins working as a volunteer gofer at Universal during his summer vacation. Five years and two student films later, he is assigned to direct the pilot film for Universal TV’s Night Gallery.

The entrance to the Universal Studios Tour is moved from Lankershim to the upper lot. The tour is augmented with photo opportunities: snowflake set, canons from the Prop Dept., etc.

Emmy for The Bold Ones for "Outstanding Series Drama."

Universal Amphitheatre opens. It closes in 1980 and reopens after major renovations in 1982, including a roof.

In January, Henry H. Martin succeeds Milton Rackmil as President. In June, Sidney Scheinberg assumes presidency of MCA, while Lew Wassermann moves up to Chairman of the Board.

The Parting of the Red Sea opens on the Universal Studios Tour.

The Sting wins a "Best Picture" Academy Award and six other Oscars.

Jaws (1975) spawns Bruce, the shark in the Jaws experience on the Universal Studios Tour.

The Rockford Files wins an Emmy for "Outstanding Drama Series."

Both Henry Fonda and Katharine Hepburn win Oscars for their performances in On Golden Pond.

Edgar Bronfman, Jr. is Executive Producer on The Border with Jack Nicholson.

The Conan the Barbarian show opens on Universal Studios Tour.

In June, Universal Studios Florida is opened in Orlando, a joint venture of MCA and the Rank Organization.

Geffen Records is acquired by MCA in March.

On March 15, the Studio Center opens at Universal Studios Hollywood, including the attractions The World of Cinemagic, Starway, and a new Backlot Tram Tour.

E.T. Adventure and the Backdraft Experience open in June at Universal Studios Hollywood.

In May, Universal CityWalk, a pedestrian promenade, opened outside Universal Studios Hollywood

In June, Edgar Bronfman, Jr., CEO of the Joseph Seagram Company, Ltd., negotiates the purchase of an 80% interest in MCA, which is renamed Universal Studios, Inc. in 1996.

On April 23, Frank Biondi, Jr. is named Chairman and CEO, while Lew Wassermann retires after sixty years with the company.

In May, Joseph E. Seagram and Sons, Inc. purchases PolyGram Holdings, transforming Universal into the largest music company in the world.

Islands of Adventure, the Portofino Resort, and Universal CityWalk open in Orlando, Florida.