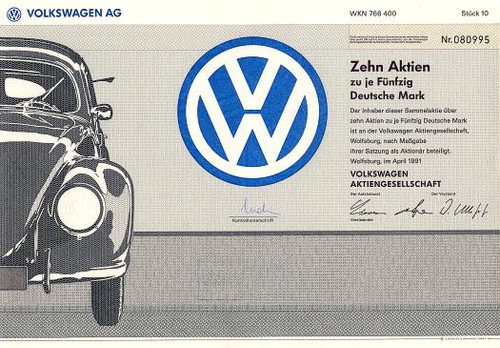 Beautifully engraved certificate from Volkswagen AG issued in 1991. This historic document was printed by Giesecke & Co. and has an ornate underprint with a vignette of a Volkswagen Beatle. This item has the printed signatures of the Company's officers and is over 25 years old. 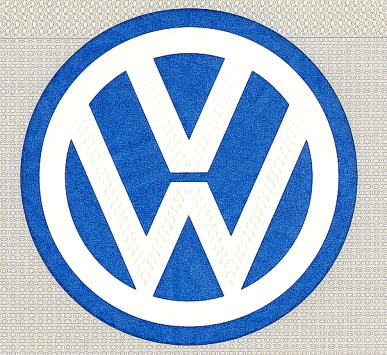 Certificate Vignette
VW was founded in 1937 as a public concern by the then Nazi government to sell the Volkswagen Beetle. After the Second World War in 1945, the British Army took control of the bomb-shattered factory and restarted Beetle production for the difficult post-war years which Germany had to face. In 1948, the British Government handed the company back over to the German state, where it was managed by ex-Opel chief Heinrich Nordhoff. In 1960, upon the floatation of part of the German federal government's stake in the company on the German stock market, its name became Volkswagenwerk Aktiengesellschaft (Aktiengesellschaft, abbreviated AG, being equivalent to the English Corp[oration] or American Inc[orporated]). The name was changed to VOLKSWAGEN AG on 4th July 1985, to reflect the company's increasing global diversification from its headquarters and main plant, the Volkswagenwerk in Wolfsburg, Germany. The corporation now goes by that name or occasionally 'Volkswagen Group' in non-German speaking markets, and is currently the fourth largest car-manufacturer in the world. In 2005 VW sold more than 5.2 million vehicles, which equals a 9.1 share of the world market. In October 2005, Porsche acquired an 18.53% stake in the business. And in July they increased their ownership to little over 25%. This was presumably done to prevent a foreign takeover, according to press reports. Nonetheless, many commentators argued that this stake fits well to the strategy Porsche has.