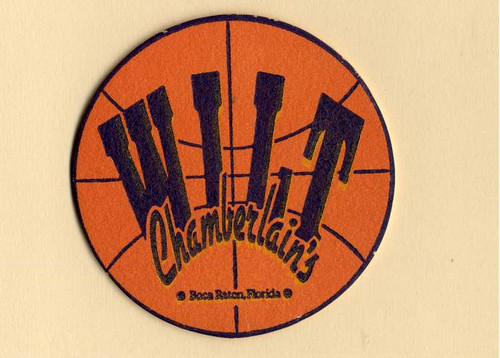 Coaster from Wilt Chamberlain's Restaurant signed in 1991. This collectible item has an image of a basketball on one side and the authentic original signature of Wilt Chamberlain on the back and is over 21 years old. 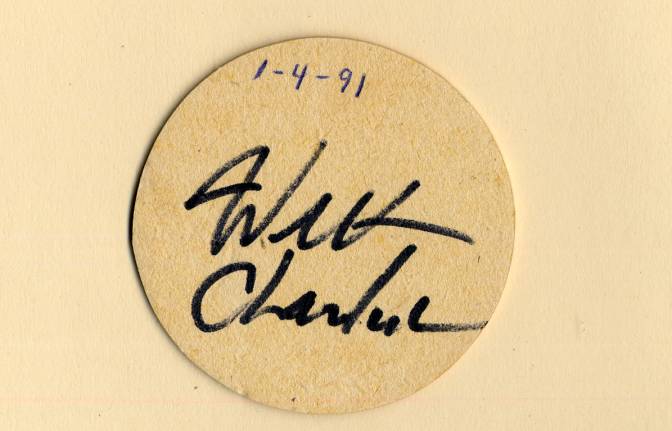 Wilt Chamberlain's Signature
Wilton Norman "Wilt" Chamberlain (August 21, 1936 October 12, 1999) was an American basketball player. He played for the Philadelphia/San Francisco Warriors, the Philadelphia 76ers and the Los Angeles Lakers of the NBA; he played for the University of Kansas and also for the Harlem Globetrotters before playing in the NBA. The 7 foot 1 inch Chamberlain weighed 250 pounds as a rookie[1] before bulking up to 275 and eventually to over 300 pounds with the Lakers.[2] He played the center position and is widely considered one of the greatest and most dominant players in NBA history. Chamberlain holds numerous NBA all-time records in scoring, rebounding and durability categories. He is the only player to score 100 points in a single NBA game or average more than 40 and 50 points in a season. He also won seven scoring, nine field goal percentage, and eleven rebounding titles, and once even led the league in assists. Although he suffered a long string of professional losses, Chamberlain had a successful career, winning two NBA championships, earning four regular-season Most Valuable Player awards, the Rookie of the Year award, one NBA Finals MVP award, and being selected to 13 All-Star Games and ten All-NBA First and Second teams. Chamberlain was subsequently enshrined in the Naismith Memorial Basketball Hall of Fame in 1978, elected into the NBA's 35th Anniversary Team of 1980, and chosen as one of the 50 Greatest Players in NBA History of 1996. Chamberlain was known by various nicknames during his basketball playing career. He hated the ones that called attention to his height such as "Goliath" and "Wilt the Stilt", which was coined during his high school days by a Philadelphia sportswriter. He preferred "The Big Dipper", which was inspired by his friends who saw him dip his head as he walked through doorways. After his basketball career ended, Chamberlain played volleyball in the short-lived International Volleyball Association, was president of this organization, and is enshrined in the IVA Hall of Fame for his contributions. Chamberlain also was a successful businessman, authored several books, and appeared in the movie Conan the Destroyer. He was a lifelong bachelor, and became notorious for his claim to having had sex with over 20,000 women. Wilt Chamberlain's Restaurant opened on December 20th, 1990. The challenge, as Wilt wrote to his guests at the time, was to create the first sports-themed, casual dining, family restaurant. The mission is to provide a diverse environment with the finest food and service, a high energy bar, and an entertainment complex that stimulates the child in all of us. History from Wikipedia and OldCompany.com (old stock certificate research service)