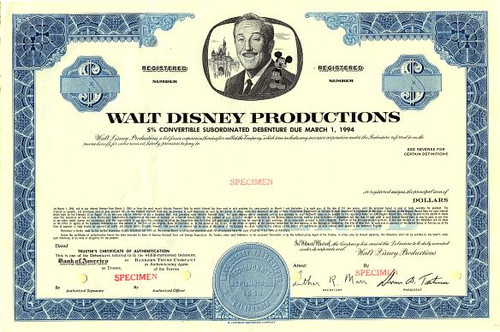 Beautifully engraved RARE Specimen 5% Convertible Debenture Certificate from the Walt Disney Productions printed in 1969. This historic document was printed by the Jefferies Banknote company and has an ornate border around it with a vignette of Walt Disney with Mickey Mouse on his shoulder. This item has the printed signatures of the Company's President and Secretary and is over 41 years old. 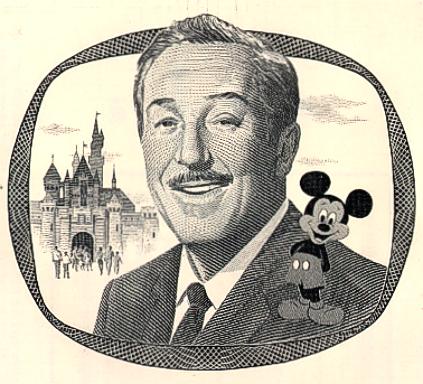 Certificate Vignette
1901 - Walter E. Disney is born 1928 - Mickey Mouse is featured for the first time in the short animated film, Steamboat Willie 1929 - Walt Disney Productions formed 1937 - Snow White and the Seven Dwarfs is released. It is Disney's first full length animated film 1940 - Walt Disney Productions offers stock as the company goes public to help lower debt. The company also moves its operations from Hollywood to Burbank, CA. 1941 - Disney animation workers go out on strike for five months. Deal to return back to work is finally brokered by federal mediators 1943 - The American Broadcast Company network is formed after the FCC rules that NBC must sell one of its two radio networks. The NBC Blue network is sold to Edward J. Noble for $8 million. Noble made his money as the creator of Lifesavers candy. 1947 - Walt Disney testifies in front of the House Committee on Un-American Activities 1951 - Leonard Goldstein and United Paramount Theaters buy ABC for $25 million 1953 - Buena Vista Distribution Company is formed to act as Disney film distributor 1954 - Disneyland, the first weekly television series from the studio debuts on ABC 1955 - Disneyland opens in Anaheim, CA at a cost of $17 million. The ABC television network is partial investor in Disneyland. The Mickey Mouse Club airs on ABC for the first time. Howard Hughes offers to sell Disney the RKO studio but Walt and Roy decline the deal 1960 - Disney buys out ABC's remaining financial interest in Disneyland 1966 - Walt Disney dies from lung cancer 1970 - Monday Night Football debuts 1971 - Walt Disney World opens in Orlando, FL. Roy Disney dies 1979 - ESPN is launched 1983 - Tokyo Disneyland opens. The Disney Channel makes its debut on cable television 1984 - Michael Eisner becomes the new CEO for Walt Disney Productions. ABC in a deal with Getty Oil acquires ESPN. ABC sells 20% of the sports cable network to Nabisco who in turn later deals the stake to Hearst 1986 - Company changes name from Walt Disney Productions to the Walt Disney Company. Capital Cities Communication, a large broadcasting group, acquires the ABC television network for 3.5 $billion. 1987 - ESPN is awarded the National Football League's first cable broadcasting deal 1992 - Disney is awarded a National Hockey League expansion team to be called The Mighty Ducks of Anaheim make their league debut. ESPN Radio is launched 1993 - Disney acquires Miramax Films 1995 - Disney announces its intent to purchase Capital Cities/ABC for $19 billion. The deal is the largest media merger in history to the point and the second largest sum of money ever paid for a U.S. company 1996 - Capital Cities/ABC officially becomes part of the Disney Company. Disney.com is launched. Disney gains ownership stake in Major League Baseball's California Angels. Team later changes its name to the Anaheim Angels. Radio Disney is launched 1997 - Knight Ridder purchases Disney's four newspapers (Kansas City Star, Forth Worth Star-Telegram, Wilkes Barre Times Leader, Belleville News-Democrat) for $1.65 billion 1998 - ESPN The Magazine is launched 1999 - Fairchild Publications is sold to Advance Publications. The magazine chains includes such titles as W, Jane, and Women's Wear Daily 2001 - News Corp. sells Fox Family Worldwide to Disney. Cable channel later becomes known as ABC Family 2002 - ESPN and ABC announce their acquisition of the National Basketball Association's television broadcasting rights 2003 - Anaheim Angels sold to Phoenix businessman Arturo Moreno for just over $180 million About Specimen Certificates Specimen Certificates are actual certificates that have never been issued. They were usually kept by the printers in their permanent archives as their only example of a particular certificate. Sometimes you will see a hand stamp on the certificate that says "Do not remove from file". Specimens were also used to show prospective clients different types of certificate designs that were available. Specimen certificates are usually much scarcer than issued certificates. In fact, many times they are the only way to get a certificate for a particular company because the issued certificates were redeemed and destroyed. In a few instances, Specimen certificates were made for a company but were never used because a different design was chosen by the company. These certificates are normally stamped "Specimen" or they have small holes spelling the word specimen. Most of the time they don't have a serial number, or they have a serial number of 00000. This is an exciting sector of the hobby that has grown in popularity over the past several years.