Check made out to International News Photos from the Walter Winchell Corporation. It was signed by Walter Winchell on the front. This is a great piece of Walter Winchell History. Bank stamp above signature. Walter Winchell (1897-1972) born on Apr 7 was a US journalist and broadcaster. His newspaper columns and radio broadcasts containing news and gossip gave him a massive audience and much influence in the U.S. during the 1930-50s. 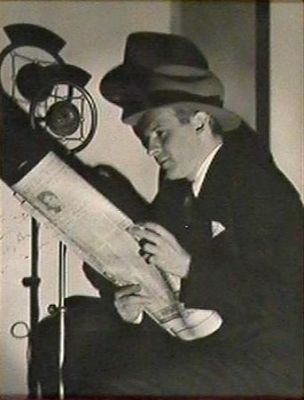 Walter Winchell built up one of the highest rated programs in radio history employing a rapid-fire style of newscasting. Usually working in the studio with his hat on, Winchell was heard literally by millions of American families on Sunday evenings. His familiar opening was: "Good evening, Mr. and Mrs. North and South America and all the ships at sea... let's go to press!" He could make you or break you. He was a pioneering gossip columnist and a master of the media before his time. Walter Winchell crafted public opinion in the 1930s and '40s. He wrote a daily column that ran in 2,000 newspapers and reported for a weekly radio broadcast. In the 1950s he hosted a television series. But Winchell also broke people, ruined careers and in the end, shifted from a supporter of FDR to an apologist for Senator McCarthy and became a namer-of-named during the Communist witch hunt. Walter Winchell maintained a steady exchange of correspondence with J. Edgar Hoover for over thirty years. The famous newspaper columnist discussed FBI cases with former Director Hoover and publicized FBI accomplishments. These documents can be seen at http://foia.fbi.gov/winchell.htm under The Freedom of Information Act.