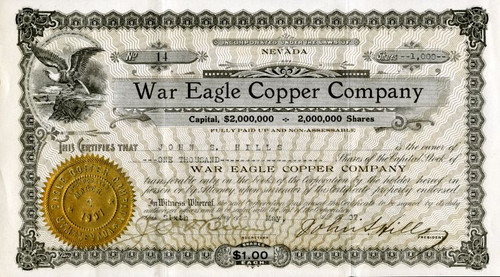 Beautiful uncancelled stock certificate from the War Eagle Copper Company issued in 1907. This historic document has an ornate border around it with a vignette of an eagle. This item has the signatures of the Company's President, John S. Hills and Secretary, J. P. O'Brien. 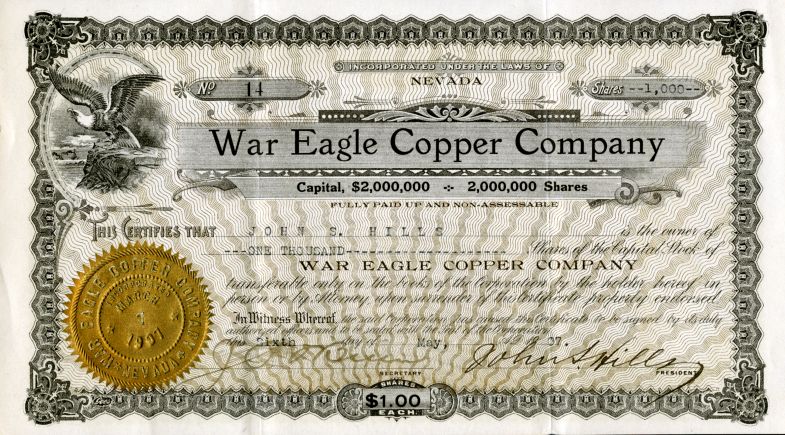 Certificate
JUDGE J. P. O'BRIEN - missed the San Francisco earthquake six weeks, coming to Tonopah just that length of time before the cataclysmic disturbance in the good old city by the Golden Gate. The Judge did not leave San Francisco because he knew the earthquake was due to arrive, but because he recognized in Nevada a place worthy of a man's best efforts. He was born in San Francisco, attended the public schools and read law under the now famous attorney, D. M. Delmas. Mr. O'Brien formed a partnership with E. L. Campbell, which continued several years. He acquired a peculiar fascination for mining law. In 1896 he went to Tuolumne County, where he built up an extensive practice, largely cases of mining law. Judge O'Brien returned to San Francisco in 1903, and almost immediately he became the legal representative of some of the biggest mining companies and other interests in the State. Coming to Tonopah, Mr. O'Brien at once entered actively upon the practice of his profession, devoting his time principally to the law pertaining to mining, water rights and corporation business generally. May 6, 1907. he was appointed District Judge bv Governor Sparks, to fill the position created by the last legislature, when a new district was formed. Although the salary is the highest ever paid to any judge in the state, Mr. O'Brien refused the appointment three times, preferring to look after the extensive interests which he represented, but was persuaded to accept. He is a Democrat, strong in the councils of the party, and on the bench is admitted to have few equals as an interpreter of the laws. Who's Who In Nevada, Brief Sketches of Men Who are Making History in the Sagebrush State. History from Encyberpedia and OldCompany.com (old stock certificate research service)