Beautiful certificate from the Washington Mining Company issued in 1873. This historic document has an ornate border around it with a vignette of smokestacks with mountains in the background. This item is hand signed by the Company's President, Chas. Leech and Secretary and is over 135 years old. Located 6l miles east of Washington on the Yuba River. Originally a German owned company. Owned 450 acres, 20 stamp mill. Probably more than $1 millions produced. [Ref: CDMG Nevada County, 1918, pp. 256-7] 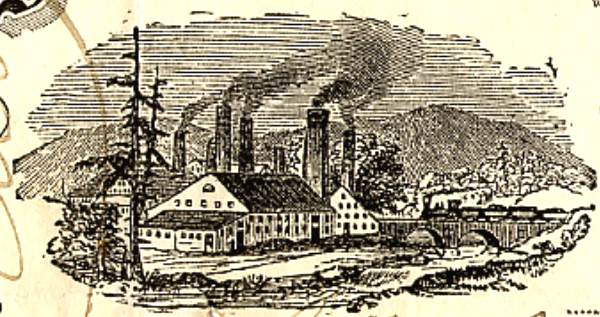 Certificate Vignette
Nevada County, in northwestern California, is one of the gold bearing regions discovered in the mid-nineteenth century. Early miners panned for gold, changing to hydraulic mining (washing the gold out of near surface rock) as the river beds were exhausted. Eventually hard rock mining, digging down into the bedrock, was the only profitable method of mining. In Nevada County veins of gold were found in quartz and the area became famous for quartz mining. During the 1850s, miners worked individually or in small informal groups. The change from placer to hard rock mining was accompanied by a change to large incorporated companies and heavy machinery. By the 1860s, San Francisco investors were buying up mining claims and establishing corporate offices in San Francisco. Eventually many companies set up a second office in New York in order to trade on the eastern stock exchange.