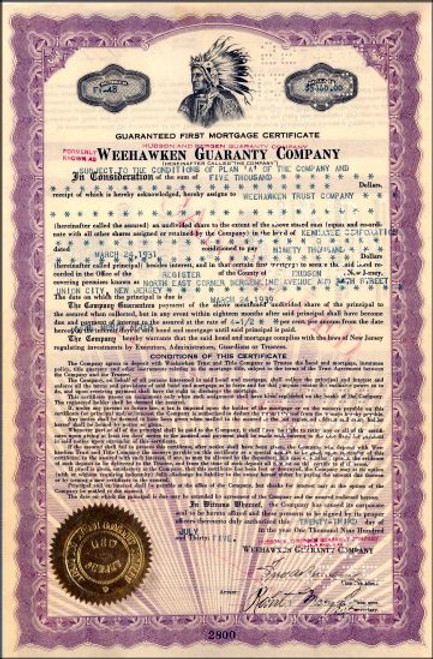 Beautifully engraved certificate from the Weehawken Guaranty Company issued in 1935. This historic document has an ornate border around it with a vignette of an indian chief. This item is hand signed by the Company's Vice President and Assistant Secretary and is over 67 years old. 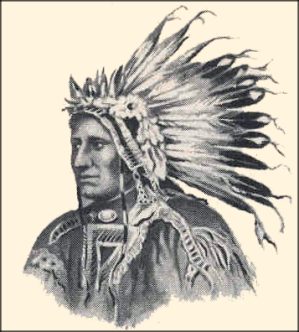 Certificate Vignette
Weehawken is a township, Hudson county, northeastern New Jersey, U.S. It lies 5 miles (8 km) north of Jersey City and opposite New York City on the Hudson River. An industrial port and railroad centre, it is the western portal of the Lincoln Tunnel. It was settled by the Dutch about 1647 when Maryn Adriadsen received a patent for 169 acres (68 hectares) of land. Prior to 1840, when Hudson county was formed, Weehawken was part of the Old Township of Bergen. Weehawken township was incorporated in 1859. There are various theories about the derivation of its Delaware Indian place-name; one holds that it means "corn (maize) land," others allude to "trees" and "mills." Highwood, the estate of New York banker James Gore King, was the scene in July 1804 of the duel in which Alexander Hamilton was fatally wounded by Aaron Burr; a bronze bust of Hamilton marks the site. The semicircular wall surrounding the Hamilton monument was built by King to protect his guest, author Washington Irving, from falling off the promontory where he liked to nap. Pop. (1990) 12,385; (1996 est.) 12,591.