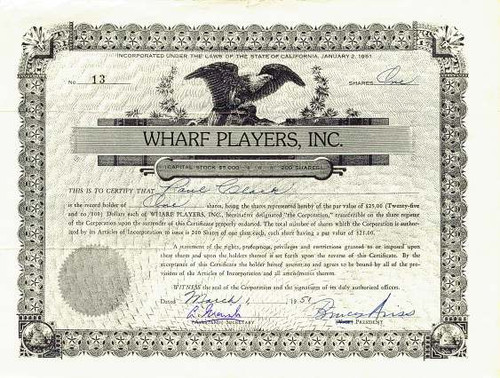 Beautifully engraved RARE certificate from the Wharf Players, Inc. issued in 1951. This historic document was has an ornate border around it with a vignette of an eagle standing on a rock. This item is hand signed by the Company's President ( Bruce Ariss ) and Secretary and is over 53 years old. This is the only certificate we have seen from this company and believe it to be quite rare. The certificate was issued to Paul Clark.

Certificate Vignette
Located on Cannery Row in Monterey California, the Wharf Theater's opening night was on May 18, 1950, and the play was HAPPY BIRTHDAY starring Ruth Marion McElroy. The set designer and builder for the production was Bruce Ariss and he also did sets and played lead in the second production, Eugene O'Neill's four one-act sea plays, THE LONG VOYAGE HOME. Towards the end of 1950 Kenn Smith, who had carried the organizational and financial load of the Wharf Theater almost single-handed, offered the theater for sale. A group of actors and friends of the theater formed a corporation, The Wharf Players, Inc. in February of 1951 and became the lessee of the theater. One of the plays presented in 1951 was Bruce Ariss' POINT OF DEPARTURE based on an incident involving a sex cult, supposedly created by Henry Miller in Big Sur. POINT OF DEPARTURE was so successful that MGM scouted and lured Bruce to Hollywood where he worked for the next five years, commuting from Monterey. Dan Totheroh directed all the productions except one from HAPPY BIRTHDAY through POINT OF DEPARTURE. Bruce Ariss died in September of 1994. Bruce Ariss, an author, artist and cartoonists, was the author of the fictional book, "Artists and Models", which aptly describes the communal lifestyle of the neighborhood as it was in the 1930s and 40s when John Steinbeck, his close friend, dwelt among them. Bruce, and his wife, Jean, author of the book, "The Quick Years", were part of the intellectual circle that frequented "Ring's Restaurant" in Monterey, a wonderful place with a walled outdoor patio where poets read and art was displayed. On January 11, 1997 the theater was renamed the Bruce Ariss Wharf Theater. Also, Bruce Ariss Way in Cannery Row was named after Mr. Ariss. Cannery Row is a historic area of the city of Monterey, located on the Bay between the breakwater and the Pacific Grove border. Cannery Row is a Mecca for entertainment, night life and home to more than 200 galleries plus the Monterey Bay Aquarium. John Steinbeck made this famous in his novel "Cannery Row." History from Monterey County MCTA.