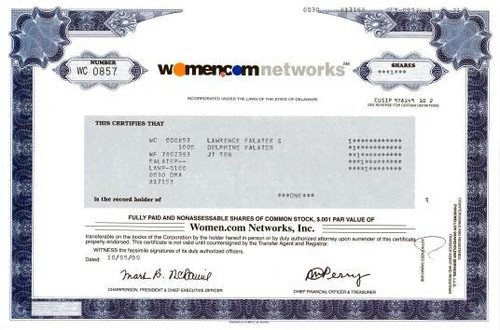 Beautifully engraved certificate from the Women.com Networks. This historic document was printed by Thomas Greg & Sons and has an ornate border around it with a vignette of the company logo. This item has the printed signatures of the Company's Chairperson, President & Chief Executive Officer and Chief Financial Officer & Treasurer.

Certificate Vignette
On December 6, 2001, iVillage Inc. (Nasdaq: IVIL), announced that it has become aware of a pending class action lawsuit against its Women.com Networks, Inc. subsidiary, certain former officers and directors of Women.com, and certain underwriters of Women.com's initial public offering of common stock in October 1999, alleging violations of federal securities law surrounding the initial public offering. Women.com has yet to be served with a copy of the complaint. iVillage believes that the lawsuit and the claims asserted against Women.com are without merit and intends to vigorously defend against these claims. iVillage acquired Women.com in June 2001.