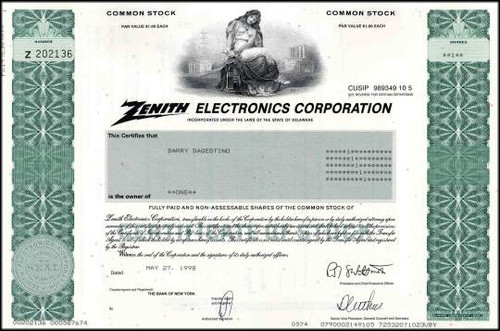 Beautifully engraved certificate from the Zenith Electronics Corporation issued in 1998. This historic document was printed by the Banknote Corporation of America and has an ornate border around it with a vignette of an allegorical woman. This item has the printed signatures of the Company's President and Chief Executive Officer and Senior Vice President, General Counsel and Secretary.

Certificate Vignette
Beginning with the advent of radio, the Zenith name has been synonymous with quality and innovation. A pioneer in electronics technology, Zenith has invented countless industry-leading developments, including the first wireless TV remote controls, the first portable and push-button radios, and the first HDTV system using digital technology. The Early Years Zenith got its start in 1918 when two wireless-radio enthusiasts set up a "factory" on a kitchen table in Chicago and began making radio equipment for other amateurs. By the early 1920s, the infant radio industry began to grow as did the business, which sold radios under the name "Z-Nith." (This was the origin of the Zenith Trademark, derived from the call letters of the founders' amateur radio station, 9ZN.) Zenith Radio Corporation was incorporated in 1923. The young company's early accomplishments included the world's first portable radio (1924), the first home radio receivers to operate on household current (1926), and the first automatic push-button radio tuning (1927). Zenith's famous slogan, "The Quality Goes In Before The Name Goes On," was first used in 1927. Founded on radio engineering, Zenith soon became a leader in other consumer electronics developments, such as the first all-electric TV station (1939), the first FM radio station in the Midwest (1940) and the world's first subscription TV system (1947). Zenith pioneered AM and FM radio broadcasting - including the invention of the stereo FM radio broadcast system, authorized by the Federal Communications Commission in 1961 and still in use worldwide - and played a key role in developing broadcast standards for black-and-white and color television. Television Pioneer Early television developments included some of the first prototype television receivers in the 1930s and experimental TV broadcasts, which began in 1939 and, at the request of the FCC, continued during World War II. In 1948, Zenith introduced its first line of black-and-white TV sets. Among the many pioneering Zenith developments in the early days of television were the industry's first 21-inch, three-gun rectangular color picture tube (1954), the first wireless TV remote control, "Flash-Matic" (1955) and "Space Command," the first practical wireless remote control, which revolutionized TV tuning worldwide for the next quarter century (1956). Zenith introduced its first color TV sets for consumers in 1961 and quickly established itself as a leading brand. The 1969 introduction of the revolutionary "Chromacolor" black-matrix (negative guardband) picture tube doubled the image brightness of color television and established a new standard of performance for the entire industry. The "EFL" (extended field length) electron gun (1976) and "System 3" modular TV chassis (1978) contributed to Zenith's continued strength in color television during the 1970s. From "Zenith Radio" to "Zenith Electronics" Mounting competitive pressures in its core consumer electronics business led Zenith to use its broad engineering and marketing expertise to diversify, as the company entered the original equipment manufacturer (OEM) components and cable television products businesses in the late 1970s. In 1979, Zenith acquired the Heath Company, the world's largest manufacturer of build-it-yourself electronic kit products for hobbyists. Capitalizing on Heath's entry into personal computers, Zenith formed Zenith Data Systems in 1980. Zenith's management built the computer business into a billion-plus-dollar operation by the late 1980s and sold the business in 1989. By the mid-1980s, Zenith Cable Products (later known as Zenith Network Systems) was a leading supplier of set-top boxes to the cable industry and a pioneer in cable modem technologies. The 1990s saw this business evolve into a supplier of digital set-top boxes for wired and wireless networks. Zenith sold the network systems division in 2000. The company marketed its last radio in 1982 and changed its name from "Zenith Radio Corporation" to "Zenith Electronics Corporation" in 1984. Zenith remained committed to audio engineering related to television; Zenith engineers co-developed the multichannel television sound (MTS) transmission system adopted by the industry for stereo TV broadcasts (1984), and received an Emmy for pioneering work on development of MTS stereo TV (1986). A major Zenith advance of the 1980s was the patented "flat tension mask" technology for high-resolution color video displays with perfectly flat screens, glare-free viewing and superior performance. Other noteworthy Zenith television innovations include TV receivers with "Sound by Bose" (1986) and "Dolby Surround Sound" (1988), as well as the first TVs with built-in closed caption decoders (1991), the first TVs with an electronic program guide (1994), and the first TVs with a track-ball operated remote control (1995). Digital High-Definition Television Since 1988, Zenith has been a Leader in Digital HDTV technologies. As one of HDTV's earliest proponents, Zenith has developed a number of key digital technologies. Zenith was the first to propose a partially digital signal, pioneered the use of the so-called "taboo" broadcast channels for the transition to HDTV and was the first to use computer-friendly progressive scanning. Zenith developed the VSB (vestigial sideband) digital transmission system adopted in December 1996 by the Federal Communications Commission as part of the ATSC (Advanced Television Systems Committee) digital television broadcast standard. In 1997, Zenith and other members of the Digital HDTV Grand Alliance earned a technical Emmy for pioneering developments behind the ATSC standard. Zenith's first HDTV products, digital HDTV receiver/decoders, were introduced in 1998, followed by integrated Digital HDTV sets in 1999 and HD-compatible monitors in 2000. HDTV plasma display panels are planned for 2001. In November 1995, LG Electronics Inc. (LGE), a world leader in consumer electronics, acquired a majority interest in Zenith. Zenith launched a major brand revitalization program in 1997, updating its famous lightning bolt logo and creating a new marketing campaign designed to introduce the company and its products to a new generation of consumers. In 1998, Zenith was recognized as the top consumer electronics brand in a massive customer satisfaction survey in Fortune magazine. In 1999, Zenith completed a broad financial and operational restructuring plan designed to return the company to financial health and leverage its brand, distribution and technology strengths. In November 1999, Zenith became a wholly owned subsidiary of South Korean electronics company LG Electronics.