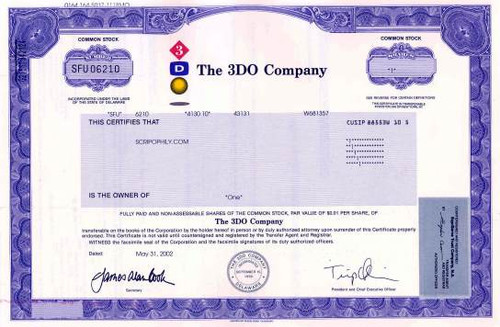 Beautifully engraved certificate from The 3DO Company. This historic document was printed by the American Banknote Company and has an ornate border around it with a vignette of the company logo. This item has the printed signatures of the Company's President and Chief Executive Officer ( W.M. (Trip) Hawkins, III )and Secretary.

Certificate Vignette
On May 28, 2003, The 3DO Company, a Delaware corporation along with its wholly owned subsidiary, The 3DO Company, a California corporation, filed voluntary petitions for relief under Chapter 11 of Title 11 of the United States Code (the "Bankruptcy Code") in the United States Bankruptcy Court for the Northern District of California (the "Bankruptcy Court"). The Registrant has substantially ceased all of its operations, and is currently managing its assets as a debtor in possession pursuant to Sections 1107 and 1108 of the Bankruptcy Code. The Registrant is currently in the process of contacting parties that may be interested in purchasing the Registrant or its assets. Pending the completion of the sale of the Registrant or its assets and the subsequent liquidation for the benefit of the bankruptcy estate and its creditors, the Bankruptcy Court will retain and exercise the authority to approve or disapprove any actions of the Registrant. The Registrant's Common Stock was delisted from the Nasdaq National Market on June 9, 2003. About The 3DO Company The 3DO Company, headquartered in Redwood City, Calif., develops, publishes and distributes interactive entertainment software for personal computers, the Internet, and advanced entertainment systems such as the PlayStation(R)2 computer entertainment system, the Xbox(TM) video game system from Microsoft, and the Nintendo GameCube(TM) and Game Boy(R) Advance systems.