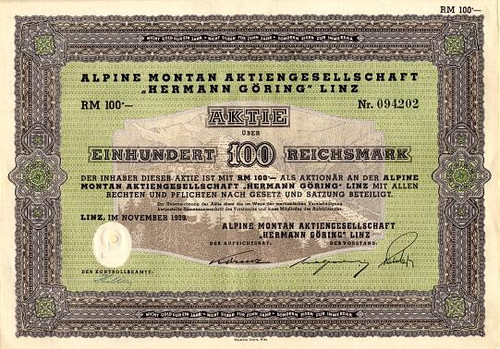 Certificate from the Alpine Montan AG. "Hermann GÃ¶ring" Linz issued in Novermber 1939. This historic document was printed by Waldheim-Eberie and has an ornate border around it with a vignette of a mountain scene. This item has the printed signatures of the Company's President and Secretary and is over 70 years old. 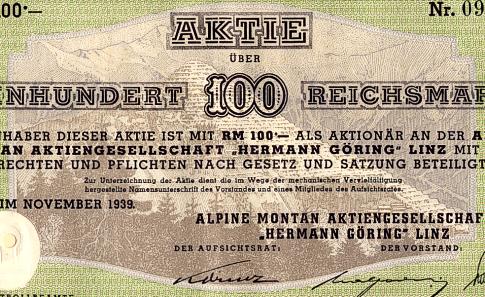 Certificate Vignette
Montanwirtschaft. Based in May 1938, Linz, subsidiary of the realm works in Berlin ("realm works AG for ore mining industry and ironworks "Hermann GÃ¶ring" Linz") with the alpine Montan AG developed from the combination of the VOEST, united Austrian iron and steel plants AG. In July 1938 the building of the hut Linz began until 1.10.1941 became the 1st Blast furnace blown until 1944 when three further blast furnaces were finished. After the first blast furnace began production, the iron works upper Danube began in such a way the division for pig iron production was called - with the production of armoring hurrying, which were installed in close convenient Nibelungenwerk the pc. Valentin. Until 1944 knew three further blast furnaces is finished, and in such a way up to the destruction of the work buildings by US-American bomb attacks in July 1944 approximately 1.5 million tons pig irons for the production were produced by tank sheet metals. Approximately 20,000 people worked in the VOEST, which had become beside the other new industrial enterprises the economical engine of the city. Among the workers were however also 8,500 forced laborers and 6,390 KZ-prisoners from duty living, who were accommodated in 2 camps at the working area and were mainly in the division blastfurnace slag Linz Ges.m.b.H "active. The total population of the city rose from 112.000 in the year 1938 to 194.000 in the year 1945. However were also approximately 40,000 prisoners of war, forced laborer, resettler, refugees (partly from settlements north the Danube, there one was afraid the approaching crew time by the Russians) and bomb-damaged in the city. After end of war the former Hermann GÃ¶ring works were seized as German property of the allied ones (the USA) and on 16 July 1946 changed the again created VÃ¶est (united Austrian iron and steel plants) due to the nationalization law "finally 1946 into the property of the Austrian state. The company was named after Hermann GÃ¶ring. Hermann Wilhelm GÃ¶ring (January 12, 1893 October 15, 1946) was a German politician and military leader, a leading member of the Nazi Party, second in command of the Third Reich, and commander of the Luftwaffe. He was tried for war crimes and crimes against humanity at the Nuremberg Trials in 1945-1946 and sentenced to death by hanging, however, he escaped the hangman's noose around two hours before his scheduled execution by way of potassium cyanide. He was of aristocratic heritage and a war hero of World War I, having won the coveted Pour le MÃ©rite.