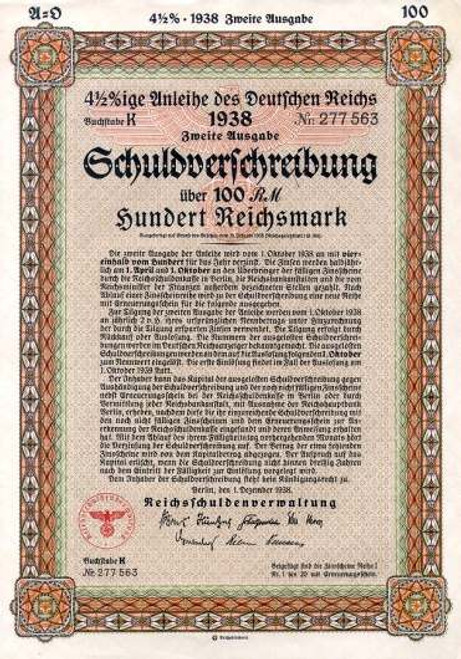 Engraved certificate from the The Treasury of Germany Bweite Uusgabe Schuldverfchreibung issued in 1938. This was issued to fund the German War Machine and resulted in WWII which began in 1939. This historic certificate has an ornate border with an engraving of the German eagle with a swastika. This is an authentic bond from Nazi Germany for 100 Reichsmark. It has printed signatures of 9 Nazi government officials. This bond was due and payable in 1949, but fortunately there was no one around to repay the investors. This historic certificate is over 70 years old and looks stunning framed. The World War II bond Certificates are very collectible and becoming difficult to find. There are also nine (not shown) unused coupons with an embossed nazi seal on each and swastika on each coupon. The bond has a very ornate water mark pattern within the paper. This is the first of these bonds I have seen that do not have any cancellation markings or holes. Please be advised that we respect and will sell this item subject to the conditions of existing German Law of statues §86 and $86a StGB, which states "A historical and military item from the year 1933-1945 with a Third Reich emblem, is not to be used in any propagandistical way. It is strictly forbidden and a criminal offence." The item will only be sold with the undertanding that it will be used for educational intention, historical research or to report about the happenings of the time. We reserve the right not to sell this to anyone if we believe the item will not be used within the actual or spirit of the existing German Law.