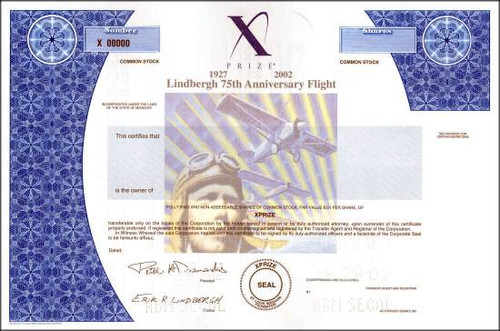 Beautifully engraved SPECIMEN commemorative certificate from the X Prize . This historic document was printed by the Security-Columbian Banknote Company and has an ornate border around it with a vignette of the X Prize logo and an underprint of Lindbergh. This item has the printed signatures of the Company's President (Peter Diamandis) and Trustee ( Erik Lindbergh ). The certificate commemorates Erik Lindbergh's transatlantic Flight 75 years after his grandfather's historic flight. 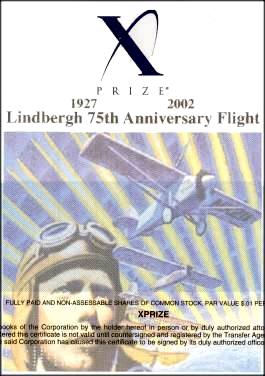 Certificate Vignette
The X PRIZE competition is a $10 million prize for the first private team to fly 100 kilometers (62 miles) to space, return to Earth and repeat the flight within two weeks. A winner is expected in the next 12-24 months. The X PRIZE competition, the first-ever space-based incentive competition, follows in the footsteps of more than 100 aviation incentive prizes offered in the early 20th Century that created today's $300 billion-dollar commercial air transport industry. The most significant of these prizes was the Orteig Prize, won by Charles Lindbergh for his 1927 flight from New York to Paris. On October 4, 2004 SpaceShipOne achieved its most spectacular flight and climbed to an altitude of 364,000 feet (70 miles), eight miles beyond what was needed to win the $10 million Ansari X Prize. "Today we have made history. Today we go to the stars," said Peter Diamandis, co-founder of the X Prize Foundation. The certificate we have for sale commemorates Erik Lindbergh's transatlantic Flight 75 years after his grandfather's historic flight. On May 4, 2002, Erik Lindbergh safely flew Solo from New York to Paris in 17hrs, 7min and successfully recreated hist grandfathers flight, Charles Lindbergh, 75 years later. Avoiding thunderstorms and icy wings, Erik Lindbergh, flying in the footsteps of his grandfather Charles Lindbergh, completed his trip to Paris, landing at 11:23 an Le Bourget in Paris, France. Moments after landing, Erik kissed the ground and embraced his mom, Barbara Robbins. He then was greeted by Peter H. Diamandis, Chairman and President of the X PRIZE, and held up a commerative certificate from the same series being sold at Scripophily.com. 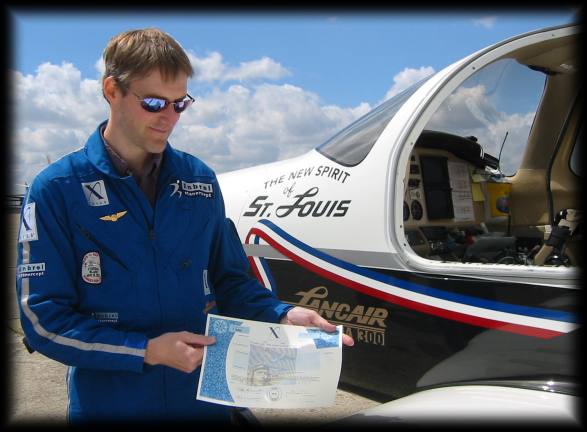