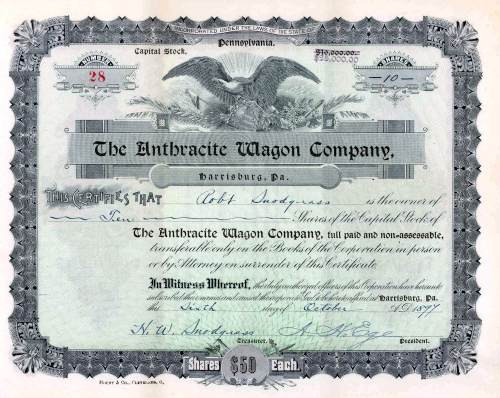 Beautifully engraved certificate from the Anthracite Wagon Company issued in 1897. This historic document has an ornate border around it with a vignette of an eagle with a shield. This item is hand signed by the Company's President ( A. H. Ege ) and Treasurer ( Robert Snodgrass ) and is over 110 years old.

Certificate Vignette
Anthracite Wagon Company was one of the leading industries of Harrisburg, Pennsylvania in the 1890's. They made both coal and business wagons. PROF. A. H. EGE, A. B., A. M. Mechanicsburg can boast of an unusual number of scholarly men, and one of these is Prof. Ege, whose long connection with the educational interests of Cumberland county is well known. In addition to being a successful and popular educator, Prof. Ege has been identified with both business and public matters to such an extent as to make him an important factor also in these circles. Prof. Ege was born April 2, 1838, in Baltimore county, Md., a son of Rev. Oliver Ege, a minister of the M. E. Church, connected at that date with the Baltimore Conference. In his boyhood, Prof. A. H. Ege attended the public schools, and in the fall of 1857 he entered the Junior Class at Dickinson College, where he was most creditably graduated in 1860, with a degree of A. B., at a later date securing the degree of A. M. About 1860, in association with his father, he bought the Cumberland Valley Institute at Mechanicsburg, and in 1865 he took charge of the institution as principal. Prof. Ege devoted fifteen years to the interests of this school, meeting with great success, but in 1878, he gave up his connection with it, and took an extended tour in Europe. In 1883, in partnership with John T. Richardson, of Harrisburg, he established the and Switch Department of the Carlisle Manufacturing Company, which was continued for six years, then sold, and a similar business was established at Curtis Bay, Md. This was soon disposed of also, and the partners went to Harrisburg, there establishing what is known as the Anthracite Wagon Company, which was chartered in 1895, with Prof. Ege president. In 1891 Prof. Ege married Anna J. Megary, daughter of William Megary, of Cumberland county. Since boyhood he has been an active member of the M. E. Church and for thirty years has held official relationswith it, as Recording Steward and Secretary of the board of trustees. He has worked zealously in the Sunday-school, and in fact has been deeply interested in every branch connected with that religious body. Since 1872 he has been a Prohibitionist, and has lectured and written many able articles on temperance topics. For some years he has been secretary and chairman of the Cumberland County Prohibition party, being well equipped for leadership. Prof. Ege is also prominent in the various Masonic bodies, is a member of Eureka Lodge, No. 302, F. & A. M., Mechanicsburg, and has belonged to St. John's Commandery of Carlisle ever since 1873. For the last thirty years few men have been more variously active in Cumberland county than has Prof. Ege, and what is notable is that he is equally well at home as a teacher, lecturer, business man, or member of the social circle. History from Wikipedia and OldCompanyResearch.com.