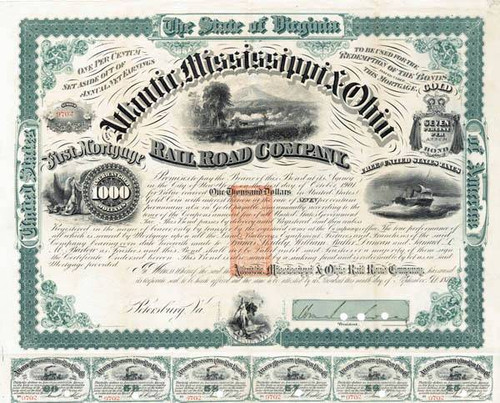 Beautifully engraved $1000 Bond Certificate from the Atlantic, Mississippi and Ohio Railroad Company issued in 1871. This historic document was printed by the Continential Banknote Company and has an ornate border around it with a fantastic vignettes of a train traveling through a valley with mountains in the background, a ship and an eagle. There is also a large imprinted revenue stamp on its face. This item is hand signed by Confederate Major General William Mahone as President and is over 147 years old. Punched cancelled. 57 coupons attached on bottom of bottom (only one row shown). 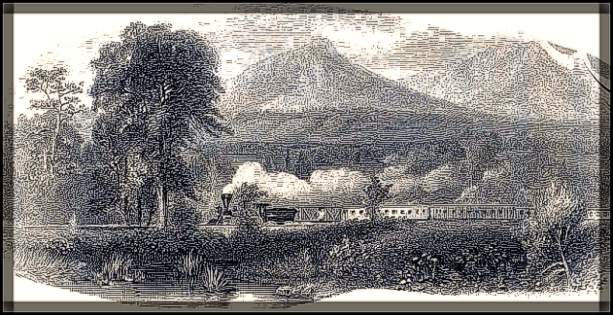 Certificate Vignette
The Atlantic, Mississippi & Ohio Railroad was formed in 1870 from the consolidation of three Virginia railroads: the Norfolk and Petersburg (connecting these two cities), the Southside (running from Petersburg to Lynchburg), and the Virginia and Tennessee (running from Lynchburg to Bristol on the Tennessee border). The Atlantic, Mississippi & Ohio Railroad was sold in 1881 to the Philadelphia investment banking firm of E.W.Clark and Company and renamed Norfolk & Western Railroad. 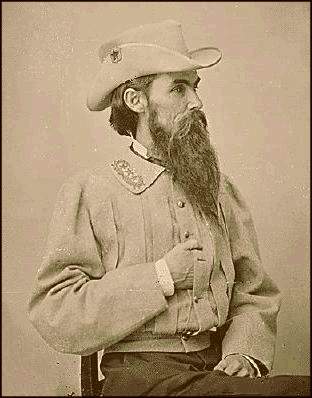 General William Mahone
Major General William Mahone was born at Monroe, Southampton county, Va., December 1, 1826. His family in Virginia was descended from an Irish progenitor of the Colonial period. Both his grandfathers served in the war of 1812, and his father commanded a Militia regiment during the Nat Turner insurrection. He was graduated at the Virginia military institute in 1847, after which he taught two years at the Rappahannock military academy. He then entered upon a career as civil engineer in which he became distinguished, engaging in the construction of new railroads in Virginia, notably the Orange & Alexandria and Norfolk & Petersburg lines. Overcoming obstacles that had been pronounced insuperable in the construction of the latter line, he subsequently became president of the railroad company. He then conceived his great project of consolidating various roads into a system from Norfolk to Bristol, Tenn., with the ultimate object of extending connections to the Mississippi and to the Pacific coast. But these enterprises were brought to a sudden check by the Political events of 1860-61. He promptly offered his services to Virginia, was commissioned lieutenant-colonel, and soon promoted colonel of the Sixth Virginia regiment. Serving first at Norfolk, he was promoted brigadier-general November 16, 1861. After servin in the defense of Drewry's bluff, he fought his brigade in Huger's division at Seven Pines, where his men and Armistead's struck the enemy a telling blow on the second day. He participated in the Seven Days' battles before Richmond, and in Anderson's division of Longstreet's corps conducted his brigade into action at the battle of Second Manassas with conspicuous gallantry, receiving a severe wound which prevented his participation in the Maryland campaign, though his famous brigade was distinguished in the valorous defense of the South mountain passes. Returning to his command, he served through the succeeding struggles on the Rappahannock and in Pennsylvania, and during the first day's fighting in the Wilderness was intrusted with the command of his own, Wofford's, Andersoti's and Davis' brigades, in an attack on the flank and rear of Grant's advance, which rolled Hancock's command back in confusion and promised to repeat the victory of Chancellorsville, when Longstreet fell, as Jackson had fallen on the former field. When his division commander was called to fill Longstreet's place, Mahone was given command of Anderson's division, and Longstreet added his voice to that of A. P. Hill in recommending the promotion of the dashing infantry chieftain. As a division commander, though without the official rank, he was distinguished in a successful attack upon Hancock, May 10th, and the severe repulse and almost capture of a portion of Warren's corps on the North Anna. Before Petersburg he brilliantly defended the Weldon railroad, and at the time of the breaking of the Confederates lines by the explosion of a mine, July 30th, his division to the relief of Gen. Bushrod Johnson's men, he was specially distinguished. Moving promptly with he engaged in repeated desperate charges, which finally resulted in the utter repulse and terrible slaughter of the enemy. Here the tardy promotion arrived, he being promoted major-general on the field by General Lee, which was promptly confirmed by the President and Congress. Of Mahone's part in the battle of the Crater, Col. W. H. Stuart, of the Sixty-first Virginia, has said: "The whole movement was under his immediate and personal, direction, and to him, above all, save the brave men who bore the muskets, belong the honor and credit of recapturing the Confederate lines." To the last he held his men together in a remarkably spirited and unified organization, which was inspired with a strong esprit du corps, and distinguished for readiness to take all chances in either defeiase or assault. He surrendered at Appomattox, and returned to the railroad management from which he had been called four years before. Becoming president of the two lines extending from Petersburg to Bristol, Tenn., he consolidated the three companies into the Atlantic, Mississippi & Ohio railroad company, which he managed until the financial crisis of 1873, when a foreign combination gained control and the system became known later as the Norfolk & Western. Though defeated in this great enterprise he managed that upon the sale of the lines $500,000 was paid to the State of Virginia for her claim, the whole amount of which he subsequently caused to be appropriated for educational purposes. Before the close of the war General Mahone had served in the Virginia Senate in addition to his duties in the field, and during the reconstruction period he exerted a very powerful influence toward the comparatively peaceful restoration of home rule which was brought about in his State. In 1878 he was defeated in a contest for the Democratic nomination for governor. In i879, under his leadership, the "Readjuster" party was formed in Virginia, which for a time controlled the State, and General Mahone was elected to the United States Senate, where he soon became identified with the Republican party, which through his efforts carried the State elections in 1881. He led Virginia delegations to the Republican national conventions of 1884 and 1888, and in 1889 was nominated for governor by his party, but defeated. He continued to retain political leadership, and in his later years made his home at Washington, where he died October 8, 1895. Confederate Military History, Vol. III, pp. 634-636.