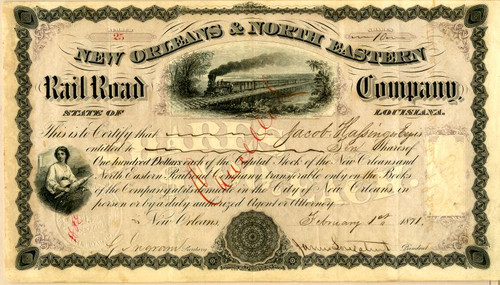 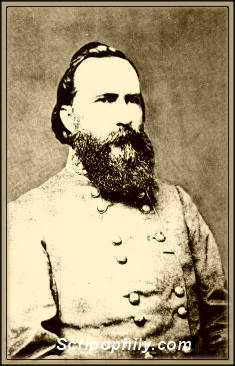 General James Longstreet
James Longstreet (1821-1904) Longstreet was born on January 8, 1821, in Edgefield District, South Carolina, and educated at the U.S. Military Academy. He served in the Mexican War and was promoted to major for gallantry in action. At the outbreak of the Civil War, he resigned his commission in the U.S. Army and entered the Confederate army as a brigadier general. His assignments included: brigadier general, CSA June 17, 1861); commanding brigade (in 1st Corps after July 20), Army of the Potomac July 2 - October 7, 186 1); major general, CSA (October 7, 1861); commanding division, Ist Corps, Army of the Potomac (October 14-22, 1861); commanding division (in Potomac District until March 1862), Department of Northern Virginia (October 22, 1861 - July 1862); commanding lst Corps, Army of Northern Virginia July 1862 - February 25, 1863; May - September 9, 1863; April 12 - May 6, 1864; and October 19, 1864-April 9, 1865); lieutenant general, CSA (October 9, 1862); commanding Department of Virginia and North Carolina (February 25-May 1863); commanding his corps, Army of Tennessee (September 19-November 5, 1863); and commanding Department of East Tennessee (November 5, 1863-April 12, 1864). Commanding a brigade, he fought at Blackburn's Ford and lst Bull Run before moving up to divisional leadership for the Peninsula Campaign. There he saw further action at Yorktown, Williamsburg, Seven Pines, and the Seven Days. In the final days of the latter he also directed A.P. Hill's men. Commanding what was variously styled a "wing," "command," or "corps," the latter not being legally recognized until October 1862, he proved to be a capable subordinate to Lee at 2nd Bull Run, where he delivered a crushing attack, South Mountain, Antietam, and Fredericksburg. By now promoted to be the Confederacy's senior lieutenant general, he led an independent expedition into southeastern Virginia where he displayed a lack of ability on his own. Rejoining Lee, he opposed attacking at Gettysburg in favor of maneuvering Meade out of his position. Longstreet, who had come to believe in the strategic offense and the tactical defense, was proven right when the Confederate attacks on the second and third days were repulsed. Detached to reinforce Bragg in Georgia, he commanded a wing of the army on the second day at Chickamauga. In the dispute over the follow-up of the victory he was critical of Bragg and was soon detached to operate in East Tennessee. Here again he showed an incapacity for independent operations, especially in the siege of Knoxville. Rejoining Lee at the Wilderness, he was severely wounded, in the confusion, by Confederate troops. He resumed command in October during the Petersburg operations and commanded on the north side of the James. Lee's "Old War Horse" remained with his chief through the surrender at Appomattox. After the war he befriended Grant and became a Republican. He served as Grant's minister to Turkey. He also served as commissioner of Pacific Railroads under Mckinley and Roosevelt, from 1897 to 1904. Criticized by many former Confederates, he struck back with his book, From Manassas to Appomattox. He outlived most of his high-ranking postwar detractors. He died at Gainsville, Georgia, on January 2, 1904, the last of the high command of the Confederacy. He is buried in Gainsville.