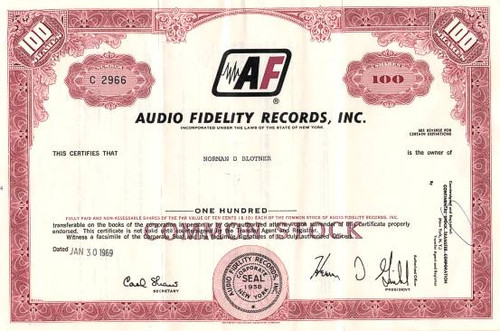 Beautifully engraved uncancelled certificate from Audio Fidelity Records issued in 1969 and 1979. This historic document was printed by the Security-Columbian Banknote Company and has an ornate border around it with a vignette of the company logo. This item has the signatures of the Company's President, Herman Gimbel and Secretary and is over 28 years old. We only have one red-1969 and one green-1979 certificate. 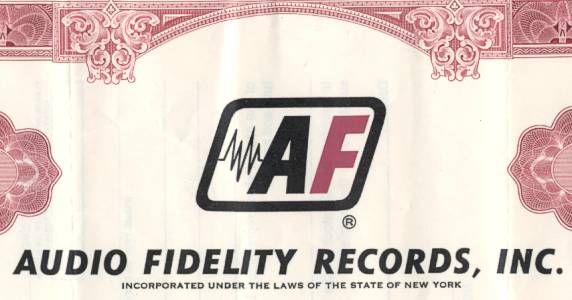 Certificate Vignette
The small record company Audio Fidelity released the first commercial stereophonic disc in November 1957. Sidney Frey, founder and president, had Westrex cut a disk for release before any of the major record labels. Side 1 was the Dukes of Dixieland, Side 2 was railroad sound effects. On December 16, Frey advertised in the trade magazine Billboard that he would send a free copy to anyone in the industry who wrote to him on company letterhead. That move generated a great deal of publicity. Frey promptly released four additional stereo disks. The equipment dealers had no choice but to demonstrate on Audio Fidelity Records. In 1958 the first stereo two-channel records were issued by Audio Fidelity in the USA and Pye in Britain, using the Westrex "45/45" single-groove system. While the stylus moves horizontally when reproducing a monophonic disk recording, on stereo records the stylus moves vertically as well as horizontally. History from Wikipedia and OldCompanyResearch.com.