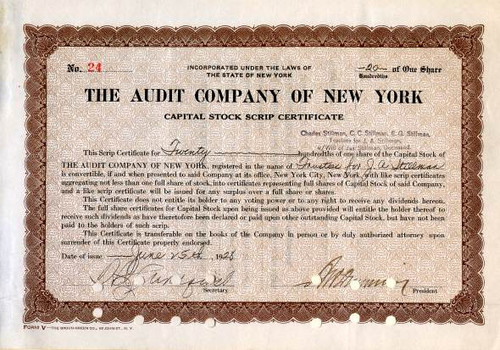 Beautiful RARE certificate from the Audit Company of New York issued in 1928. This historic document was printed by the Broun Green Company N.Y. and has an ornate border around it with the company's name on top center. This item has the signatures of the Company President, A. W. Dunning, CPA and Secretary, H. I. Lundquist and is over 89 years old. This is the first time we have had this certificate for sale and the only stock certificate we have seen from an audit company. Reported in Investor Publishing Co., 1897: The steadily Increasing demand for an independent audit of corporation accounts, that is, for an audit and examination of the books of various enmpanirs by competent experts other than those regularly employed by the companies themselves, has led to the formation of the Audit Company of New York. Every one of the officers and directors of the company nas a national rvpu'lation, and many of them have international reputations as managers of railway, insurance, and financial corporations. The presidency of the company has been taken temporarily by Mr. August Belmont, and the experts who have entered Its service Include Stephen Little. Thomas L. (Jreene, William Barclay Parsons, and Henry B. Seaman. The fact that the company includes civil engineers among its officers indicates that it purposes to examine and report upon the physical condition of properties, as well as upon their accounts and financial condition. It will undertake to furnish investors with accurate and disinterested information regarding companies in the securities of which they may wish to place their funds. It is suggested that financial institutions that arc large lenders of money, either upon securities or commercial paper, will find the Audit Company useful in determining l.ho value of the collateral they accept, and that loans will be more readily negotiated if borrowers upon a large scale can present certificates of the company as to the value of the security they have to offer. The same statement applies to merchants and manufacturers, who have occasion to enter the money market as borrowers. The company expects to be of special service to directors of corporations, who in that capacity accept serious responsibilities, yet in the majority of cases arc unable, either on account of the time required or lack of experience, to inform themselves thoroughly regarding the affairs of companies that they assist in managing. Reported in Chicago Securities 1903 The Audit Company of New York.--Organized to provide important interests with reliable information as to the earnings and financial and physical conditions of corporations and others, and is prepared at short notice to undertake all kinds of auditing of accounts and physical examinations. D1rectors--August Belmont, James Stillman, Wm. A. Nash, Joseph S. Auerbach, George G. Haven, George W. Young, William B. Leeds, Dumont Clark, G. B. M. Harvey, John I. Waterbury, T. Jefferson Coolidge, Jr. Off1cers--Acting President, August Belmont; Vice-President, W. A. Nash; Vice-President and General Manager, Thomas L. Greene; Vice-Pres1dent, John J. Mitchell; Treasurer, George W. Young; Western Manager, A. W. Dunning. The Western Board of Control, located at Chicago, consists of John J. Mitchell, chairman; James B. Forgan, James H. Eckels, John C. Black and Edwin A. Potter. This company has been in existence for several years, with headquarters in New York, and in May, 1900, opened an office in Chicago, from which latter city is handled all the business of the company west of Pittsburg and Buffalo, and a line drawn north and south thereof, excepting Cleveland, Ohio. The company examines and reports upon the financial and business condition of corporations, firms and individuals, and also upon the physical condition of railroad, manufacturing and other properties, making appraisals of them when desired. Its services are of value to investors, financial institutions, borrowers of money, directors and officers of corporations, purchasers of properties, etc. Such services are rendered confidentially, in accordance with the company's by-laws, under which all information obtained is confined to those making the examinations and to the western manager of the company. It will be seen that the Directors and Western Board of Control of the company consist of leading financiers. Some of the interests with which they are associated are shown in the following list: August Belmont, New York, banker, Chairman of the Board of Directors of Louisville and Nashville Railroad Company, Director in the Equitable Life Assurance Society, etc.; William A. Nash, New York, President Corn Exchange Bank, New York; James Stillman, New York, President National City Bank; George W. Young, New York, President United States Mortgage and Trust Company; John I. Waterbury, New York, President Manhattan Trust Company; T. Jefferson Coolidge, Boston, President Old Colony Trust Company; John J. Mitchell, Chicago, President Illinois Trust and Savings Bank; James B. Forgan, Chicago, President First National Bank; James H. Eckels, Chicago, President Commercial National Bank; John C. Black, Chicago, President Continental National Bank; Edwin A. Potter, Chicago, President American Trust and Savings Bank, while the other directors and stockholders include leading financial names in New York. The Audit Company of New York, a corporation, was acquired in 1932 by R.G. Rankin & Co., which in 1955 merged with Price Waterhouse & Co. (Partner Retires, 1958). It was said to be ''the single most significant merger in PW s history,'' because of the important clients it brought to the firm (Allen and McDermott, 1993, p. 117). 1917 - 1918 - AUDIT COMPANY OF NEW YORK. THE. 14 Wall St., New York; Western Office, New York life Building, Chicago, 111. Officers: President. A. W. Dunning: Vice Presidents, William A. Nash. George W. Young, John J. Mitchell ; Secretary and Treasurer, H. I. Lundquist ; Western Manager, Howard Kroehl. Directors: Joseph S. Auerbach, Le Roy W. Baldwin, August Belmont. T. De Wilt Cuyler. A. W. Dunning, George Harvey. August Heckscher. Alesander J. Hemphill. William A. Nash, Masou B. Starring. Cornelius Vanderbilt, John I. Waterbury, Ceorge W. Young. Western Board of Control: John J. Mitchell (Chairman). James B. Forgan, Edwin A. Potter, George M. Reynolds. 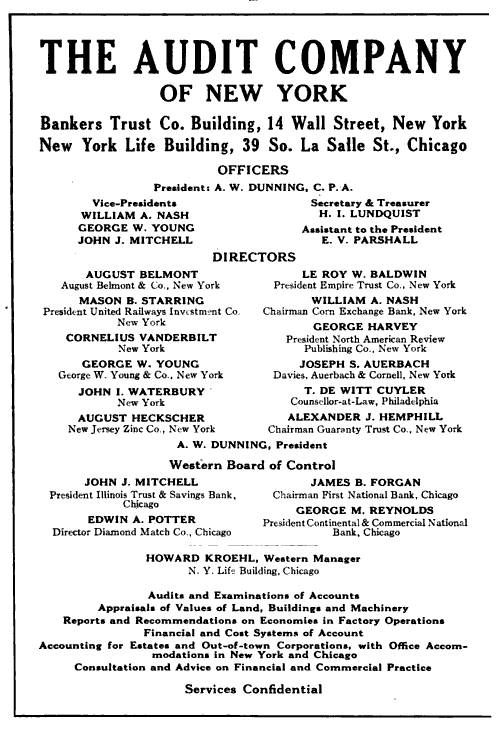