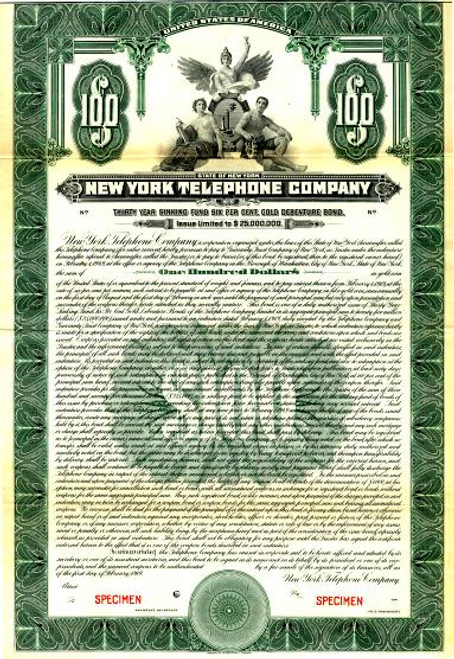 Beautiful engraved RARE specimen certificate from the New York Telephone Company dated in 1919. This historic document was printed by American Bank Note Company and has an ornate border around it with a vignette of a group of allegorical people with a candlestick phone in the center. This item is over 88 years old. 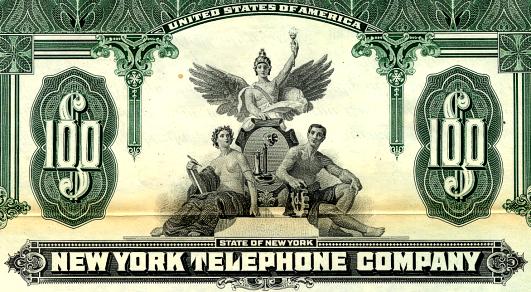 Certificate Vignette
The New York Telephone Company (NYTel) was organized in 1896, taking over the New York City operations of the American Bell Telephone Company. The Telephone Company of New York was formed under franchise in 1876 to rent telephone instruments to users, who were expected to provide wires to connect them, for example from factory to office. Such connections already existed for private telegraphs, and the new invention promised to save the cost of hiring a private telegraph operator. Manufacturers of steel wire for the Brooklyn Bridge then under construction were especially prominent among the customers under this scheme, using their own product. Western Union subsidiaries, including Atlantic & Pacific Telegraph, Gold and Stock Telegraph, and American Speaking Telephone, based their New York and San Francisco operations on the telephone exchange principle and thus were larger and more advanced than the local Bell operations. Under the November 1879 settlement of the Elisha Gray patent infringement lawsuit, Western Union handed over its telephone operations to National Bell Telephone, which then renamed itself American Bell Telephone. The merged local company was called the Metropolitan Telephone Company and in 1896 the New York Telephone Company. American Telephone and Telegraph (AT&T) eventually acquired a controlling interest. The company went underground in a big way in the 1920s, creating expensive new outside plant that fixed its geometry for the century to come. New cable ducts brought more reliable service to customers. They converged at approximately twenty wire centers, which were connected by larger trunk cable ducts running along the East and West Sides of Manhattan. The locations were a mile or sometimes two miles apart, close to concentrations of office workers without paying prime prices for land. At each wire center a new central office arose to house telephone switchboards, panel switches and other inside plant, and technicians, clerks, operators and other workers. The Manhattan and Bronx parts of the underground empire are owned by the Empire City Subway Company subsidiary. Similar construction, on a smaller scale, went on in Brooklyn, Buffalo and other urban territories. Suburban and rural service also expanded, mostly with aerial cable or open wire plant and Strowger switches. Forecasters in the late 1960s underestimated demand, resulting in a shortage of capacity in Manhattan, NYTel's principal profit area. Customers had to wait weeks for a new line or a repair, and sometimes minutes for dial tone on an existing line. The new 1ESS Stored Program Control exchanges had software bugs that kept them from carrying full load. Deferred maintenance choked MDFs with dead jumpers. There weren't enough cables to office buildings, nor enough underground conduits to install them. Morale was poor in all levels and departments. The company responded by hiring and training thousands of new employees and buying much new equipment for them to work on. Underground construction took years, but emergency installation of Anaconda Carrier pair gain systems normally used in rural areas expanded service while construction was in progress. Bell Labs added processing power to their new systems and fixed the software bugs. A new wire center at 1095 Avenue of Americas relieved four others of part of their load, as well as providing the company with a new headquarters for the next quarter century. The crisis subsided during the 1970s and workers accustomed to heavy overtime had to learn to go home on time and get along on their base pay. New York Telephone was an AT&T subsidiary until the AT&T breakup effective January 1, 1984. At that time, New York Telephone, along with the New England Telephone & Telegraph Company, became part of a Regional Bell operating company named NYNEX. The company was referred to as "New York Telephone, a NYNEX Company" before being called simply "NYNEX". On August 15, 1997, Bell Atlantic was acquired by NYNEX, who adopted the Bell Atlantic name. On June 30, 2000, Bell Atlantic acquired GTE to form the current Verizon Communications. Approximately at that time, New York Telephone's headquarters returned to 140 West St., New York, NY. New York Telephone provides local telephone service throughout the state of New York, with the exception of the area served by the Rochester Telephone Company. The company also serves the Greenwich and Byram exchanges in Connecticut. The rest of Connecticut is served by SNET, an AT&T company. One of New York Telephone's most widely-used advertising slogans/jingles was "We're all connected... New York Telephone." New York Telephone, then operating under the Bell Atlantic brand, was the first Bell telephone company to win approval to provide long distance service within its operating territory in December 1999, following the Telecommunications Act of 1996. History from Wikipedia and OldCompanyResearch.com. About Specimens Specimen Certificates are actual certificates that have never been issued. They were usually kept by the printers in their permanent archives as their only example of a particular certificate. Sometimes you will see a hand stamp on the certificate that says "Do not remove from file". Specimens were also used to show prospective clients different types of certificate designs that were available. Specimen certificates are usually much scarcer than issued certificates. In fact, many times they are the only way to get a certificate for a particular company because the issued certificates were redeemed and destroyed. In a few instances, Specimen certificates we made for a company but were never used because a different design was chosen by the company. These certificates are normally stamped "Specimen" or they have small holes spelling the word specimen. Most of the time they don't have a serial number, or they have a serial number of 00000. This is an exciting sector of the hobby that grown in popularity over the past several years.