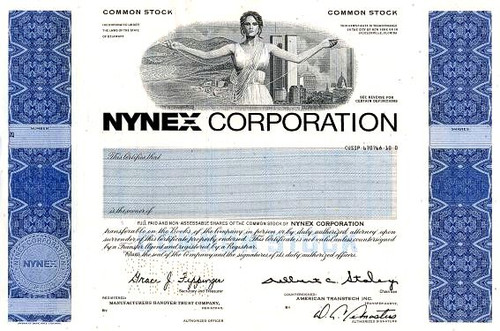 Beautifully engraved SPECIMEN certificate from the NYNEX Corporation. This historic document was printed in 1992 by the American Bank Note Company and has a block border with a vignette of a woman standing in front of two different backgrounds, a rural setting and a city setting with the World Trade Center in the background. This item has the printed signatures of the Company's Chairman and Secretary.

Certificate Vignette
NYNEX Corporation (pronounced Nine-x) was a telephone company which served five New England states (Maine, Massachusetts, New Hampshire, Rhode Island and Vermont) as well as New York. Formed January 1, 1984 as a result of the Bell System Divestiture, NYNEX was a Regional Bell operating company made up of former AT&T subsidiaries New York Telephone Company and New England Telephone. Hence, the name NYNEX stood for New York/New England, with the X representing the unknown future (or "the uneXpected"), according to advertising material, but the X is also widely believed to mean eXchange. NYNEX acquired Bell Atlantic on August 14, 1997, at which time it took the Bell Atlantic name. On June 30, 2000, Bell Atlantic acquired GTE to form Verizon Communications. NYNEX is now known as Verizon's "Northeast Bureau". Nynex also operated cable television and telephone services in the United Kingdom, with offices in Waterlooville, Hampshire, and Leatherhead, Surrey, England. In 1997 it was merged with Mercury Communications and cable operators Videotron and Bell Cablemedia and renamed Cable & Wireless Communications. Cable & Wireless's cable assets were sold to NTL in 2000. History from Wikipeida and OldCompanyResearch.com. About Specimens Specimen Certificates are actual certificates that have never been issued. They were usually kept by the printers in their permanent archives as their only example of a particular certificate. Sometimes you will see a hand stamp on the certificate that says "Do not remove from file". Specimens were also used to show prospective clients different types of certificate designs that were available. Specimen certificates are usually much scarcer than issued certificates. In fact, many times they are the only way to get a certificate for a particular company because the issued certificates were redeemed and destroyed. In a few instances, Specimen certificates were made for a company but were never used because a different design was chosen by the company. These certificates are normally stamped "Specimen" or they have small holes spelling the word specimen. Most of the time they don't have a serial number, or they have a serial number of 00000. This is an exciting sector of the hobby that has grown in popularity and realized nice appreciation in value over the past several years.